A Physician-Scientist’s Mother, Who Nursed Those With Chronic Diseases, Fueled His Passion for Biomedical Research

For this installment of the Living a Full Life series, guest editor Jame Abraham, MD, spoke with Griffin P. Rodgers, MD, MACP, Director of the National Institute of Diabetes and Digestive and Kidney Diseases (NIDDK) at the National Institutes of Health (NIH). Dr. Rodgers, a physician-scientist, joined the NIH in 1982, where he led studies demonstrating the effectiveness of hydroxyurea, the first drug approved by the U.S. Food and Drug Administration (FDA) for sickle cell disease. He is also Chief of the Institute’s Molecular and Clinical Hematology Branch and is known for contributions to research and therapy for sickle cell anemia.

On what shaped his view of medicine: “I witnessed my mother delivering equitable, compassionate care, regardless of a person’s socioeconomic status, which inculcated me with the same spirit of wanting to make a difference in people who had historically been neglected.”

On his early work in sickle cell anemia: “It was hugely gratifying. Not only did hydroxyurea reduce the frequency of painful crises, but it also decreased transfusion requirements.”

On lessons learned from COVID-19: “This long difficult period is yet another reminder of the work ahead in creating a more just and equitable health system.”

“My mother was a public health nurse who administered a lot of vaccinations. However, because of the low-income and impoverished section she covered, many of the clients or patients were unable to bring in their kids to get their vaccinations during the week. So, occasionally, she would go to their homes, mostly in poor Black neighborhoods, and she would take me, a kid in elementary school, for so-called protection,” shared Dr. Rodgers.

Seeing his mother’s dedication while doing well-baby checks and delivering vaccines in challenged communities began shaping Dr. Rodgers’ view of medicine. “I saw the potential for uplifting the quality of life in underserved populations. Equally important, I witnessed my mother delivering equitable, compassionate care, regardless of a person’s socioeconomic status, which inculcated me with the same spirit of wanting to make a difference in people who had historically been neglected,” he commented.

Dr. Rodgers continued: “I had three high school friends with sickle cell anemia, which was almost impossible to treat during the 1970s and even late 1980s. Two of those friends died while I was still in high school. So, although I was attracted to medicine as a career, the sad experience with sickle cell fueled a desire to pursue biomedical research to cure deadly diseases.”

After graduating from high school, Dr. Rodgers was accepted to Brown University in Providence, Rhode Island, where he enrolled in a 7-year program that combined an undergraduate, graduate, and medical degree. “In a sense, I was accepted to medical school right out of high school. My introduction to clinical and investigative research was with Brown Vice President of Biology and Medicine, Pierre Galletti, MD, PhD. He was not only my advisor, but a pioneering biomedical researcher, making his impact in such fields as heart-lung bypass, artificial organs, and tissue engineering.”

Dr. Rodgers shared his memories of his freshman year. “I worked on a device that combined an artificial kidney and an artificial lung, which was dubbed the ‘KLung.’ My responsibility was to take the blood before it entered this device and do measurements before and after to judge the efficiency of this technique to build oxygenated blood and to filter the blood products in a physical lung. Working in a world-class laboratory really accelerated my interest in the rigors of the scientific method,” explained Dr. Rodgers.

Dr. Rodgers was passionate about improving treatment for blood disorders, particularly sickle cell anemia. To further that goal, he entered a Masters’ program at Brown, which had an affiliated hospital in Providence. “I had a terrific mentor, Herbert Lichtman, MD, a transplanted New York City hematologist who was also a sickle cell specialist. However, there was a dearth of Black individuals in the area, which limited my ability to research sickle cell anemia. So, we chose instead to investigate red blood cell function in octogenarians and compare that in younger subjects. It was a formative time in my research career,” said Dr. Rodgers.

After receiving his medical degree from Brown University, Dr. Rodgers performed his residency and chief residency in internal medicine at Barnes Hospital and the Washington University School of Medicine in St. Louis. “While at Washington University, I had some very important mentors who further helped me develop my interest and focus on hematologic malignancies. One was James Gavin III, MD, PhD, whose early work in the lab helped identify the insulin receptor. He strongly urged me to join the NIH,” said Dr. Rodgers.

When i contacted Dr. Clarice Reid, head of the National Heart, Lung, and Blood Institute’s sickle cell disease program at the time, she recommended that I contact NIDDK. I was interested in sickle cell disease, so I wondered why she suggested an institute focused on diabetes. It turned out that the mentor she suggested, Alan Schechter, MD, had just published a paper summarizing the pathophysiology of sickle cell disease in The New England Journal of Medicine.1 So, I joined his team in 1982, and it turned out to be a propitious opportunity,” said Dr. Rodgers. Dr. Rodgers immersed himself in groundbreaking research at Dr. Schechter’s laboratory at ­NIDDK, where he and his colleagues pioneered clinical studies that demonstrated the value of hydroxyurea in treating this disease. “During that time, some studies showed that patients with myeloproliferative disorders who received hydroxyurea had a statistically significant rise in fetal hemoglobin, which led us to launch clinical studies in sickle cell disease. The patients were admitted to the hospital for 3 to 4 months, so we could be certain that noncompliance wasn’t an issue and to ascertain proper dosing and response rate. That work culminated in 1990, showing a significant fetal hemoglobin response rate in 70% to 75% of patients with sickle cell disease treated with hydroxyurea. Ultimately, our results were replicated at other places, such as Harvard and Johns Hopkins, to name a few. After the largest trial of hydroxyurea in sickle cell reported positive results, Dr. ­Schechter and I were invited to write an editorial2 about the trial and the future of hydroxyurea, which was approved by the FDA for sickle cell anemia in 1998,” he related.

Dr. Rodgers continued: “It was hugely gratifying. Not only did hydroxyurea reduce the frequency of painful crises, but it also decreased transfusion requirements. An unexpected finding was that the drug was associated with a decrease in the likelihood of acute chest syndrome, which was a frequent cause of severe disability and occasional death. However, although hydroxyurea ameliorated symptoms, patients still weren’t being cured of the disease. That led us to move into an additional area of research, developing therapies related to hematopoietic stem cells, which would have curative intent.”

Success but Lots of Work Ahead

Asked to identify the major developments in sickle cell anemia research Dr. Rodgers replied: “Of course, the hydroxyurea work was a huge step forward. Then, as the effects of hydroxyurea in the adult populations became evident, later studies confirmed that it could be even more effective in pediatric patients, which garnered FDA approval in 2017. The second major step is our current work testing a nonmyeloablative treatment approach in about 60 patients with sickle cell anemia. Currently, if we get a stem cell match, the disease-free-survival rate is close to 90%. Consequently, these patients are able to get off immunosuppressive therapies after a year or so. These results have also been replicated in other major institutions.”

Reflections on COVID-19 and More 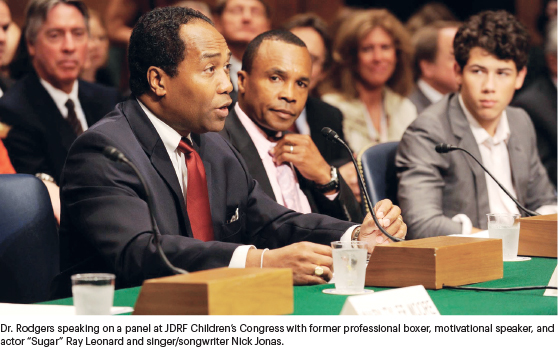 Dr. Abraham asked Dr. Rodgers to reflect on chronic diseases amid the COVID-19 pandemic from his perspective as a public health leader. “It’s obvious that the chronic and costly diseases within the purview of the NIDDK have had a disproportionate impact on members of racial and ethnic minority groups in disadvantaged communities, many of whom are at a much higher risk of contracting COVID and developing life-threatening symptoms. So, this long difficult period is yet another reminder of the work ahead in creating a more just and equitable health system,” stated Dr. Rodgers.

How does a super busy scientist and public health leader decompress? “I don’t have much free time these days, but I do enjoy travel and am sure that outlet will be available soon,” Dr. Rodgers told The ASCO Post. “I have two grown sons, and interacting with them is a big part of any free time I have. When the weather is pleasant, I get out for an occasional round of golf. That said, dealing with the chronic diseases we’ve spoken about is what keeps me up at night.”

Dr. Rodgers shared a closing thought for those pondering a possible career in the challenging field of biomedical research: “For those with a passion for research and discovery, I can say with confidence that there’s no better place than the NIH. But no matter where a career takes you, it is vital to remember that the ultimate goal is to make a positive impact on people’s lives, and you can do that regardless of what institution you work in.” ν