Inoperable Carcinoma of the Breast 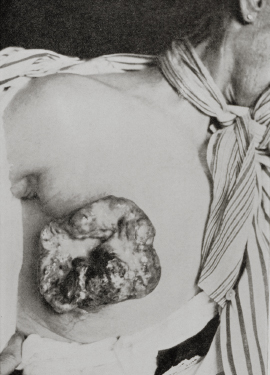 The text and photograph here are excerpted from a four-volume series of books titled Oncology: Tumors & Treatment, A Photographic History, The X-Ray Era: 1901–1915 by Stanley B. Burns, MD, FACS, and Elizabeth A. Burns. The photograph appears courtesy of Dr. Burns and The Burns Archive. To view additional photos from this series of books, visit burnsarchive.com.

It took the first several decades of the 20th century to educate both physicians and the public about the advances and safety of the surgical and radiologic therapies available for breast cancer. Francis H. Williams, MD, of Harvard, created an authoritative text that was instrumental in helping physicians better understand the treatment potentials of radiology: The Roentgen Rays in Medicine and Surgery as an Aid in Diagnosis and as a Therapeutic Agent.

The first edition was written in 1901 and sold out in 3 months. The revised second edition of 1902 was also well received. By 1903, the therapeutic uses of the x-ray had “grown so rapidly” that, in the third edition, Dr. Williams added new sections devoted to therapy and 150 new treatment results. He appealed to physicians to understand and appreciate the amazing potential of new therapies for cancers. Previously, patients with large or inoperable carcinomas were discouraged from seeking treatment. Dr. Williams used the photographs of his cases to help prove his optimistic viewpoint.

In treating larger growths, such as inoperable cancer of the breast, it may be necessary to increase the length of the exposures and make them long as the skin will bear, and even sometimes to excite a slight dermatitis. The cases [that] permit the greatest length of exposure are those in which there is a large ulcerating surface or a considerable mass of diseased tissue. The exposures in these cases should be made two or three times a week and should be of longer duration than under any circumstances. The effect of this energetic treatment is to soften the induration and cause profuse discharge. After the mass has been thus disposed of, which usually takes quite rapidly, great care should be taken to intermit the treatment should any symptoms of toxemia arise due to absorption from the growth.

When the skin is unbroken, the treatment cannot be pushed as when there is an open ulcerating surface. The X-rays applied to a large mass underneath an unbroken skin, particularly when the new growth is of a nature that increases rapidly, softens that mass in some cases, and portions of it are slowly absorbed. This process may give rise to symptoms affecting the general condition of the patient; therefore, it is necessary to proceed cautiously in those cases in which the products of the changes set up by the X-rays cannot find a ready outlet to the surface. The elimination of these products from the system is desirable; whether it is wise in cancer of the breast, where the skin is unbroken, to apply the X-ray over a very small area so vigorously so as to cause a deep ulceration and allow this drainage, is a question for experience to determine.

In treating cancer of the breast, whether primary or after operation, with the X-rays, not only should the site of the disease be exposed, but also the glands…whole shoulder and neck; likewise the other breast, for it should be remembered that the growth is liable to appear in the latter breast.

This patient weighed, before treatment, 90 pounds. The growth was cauliflower-like in character and projected 4 cm above the skin. The patient was treated with X-rays, and her lesion shrunk to a small-circumscribed ulcerative area about 4 inches wide. Her weight improved to 116 pounds. (The final disposition of the case was not recorded at the time of publication.)

Dr. Williams was the son of Henry Willard Williams, MD (1821–1895), a pioneer ophthalmologist and Professor of Ophthalmology at Harvard Medical School. Dr. Henry Williams was a founder of the American Ophthalmologic Society and its President for many years. His other sons were also physicians and continued in their father’s specialty of ophthalmology.