We read with interest a recent article published on ASCOPost.com, which summarized a paper on the role of shared decision-making in lung cancer screening.1,2 The summary and original report highlight a mandate by the Centers for Medicare & Medicaid Services (CMS) that bears careful consideration.

How did this come about? On April 30, 2014, the Medicare Evidence Development & Coverage Advisory Committee convened a panel chaired by Dr. Rita Redberg. At this meeting, speakers who advised against screening also called for mandatory shared decision-making should screening be implemented.4,5

The regulation requires discussion of more than a dozen separate “elements” (see Table 1). This requirement is a daunting challenge, especially for time-pressed general practitioners and their patients, who seek advice from the caregivers who know them best—not a confusing tutorial.

Does shared decision-making lead patients to decide against screening? Crothers et al reported, “Participants expressed surprise that the magnitude of their lung cancer risk and benefits of screening were lower than anticipated.”6

This should not be a surprise. Decision aids contain stick-figure diagrams, derived from a 2012 publication interpreting National Lung Screening Trial (NLST) results, informing patients that, if diagnosed with lung cancer by CT, they have a 1 in 5 chance of cure.7,8 This is highly inaccurate.

Multiple large screening randomized controlled trials … all show that between 50% and 80% of those diagnosed by CT screening will have long-term, recurrence-free survival.
— Frederic W. Grannis, Jr, MD, and Sheila Ross

Multiple large screening randomized controlled trials—including the NLST itself and, most recently, the Belgian-Dutch NELSON randomized controlled trial, decades of population screening in Japan, and the 20-year International Early Lung Cancer Action Program (I-ELCAP) study—all show that between 50% and 80% of those diagnosed by CT screening will have long-term, recurrence-free survival.

Would a reasonable primary care physician advise screening to a patient based on a putative 4% improvement (ie, 17% vs 21%) in 5-year survival? Will patients opt for screening after viewing decision aids, reinforced with stick-figure graphics that lend visual credence to 5:1 odds against survival? It seems unlikely. If students are taught wrong information, they will invariably give incorrect answers.

Current decision aids also greatly exaggerate the risks of lung cancer screening participation, including anxiety, false-positives, unnecessary diagnostic and treatment misadventures, and overdiagnosis. Much of this information is gratuitously inaccurate. Diagnostic algorithms—for example, those developed by I-ELCAP and the National Comprehensive Cancer Network® and utilized in modern screening programs but not employed in the NLST—reduce false-positives substantially and prevent injudicious overtreatment of benign nodules or noninvasive lung cancers.9

In a recent pilot study at 8 Veterans Affairs sites, 4,246 veterans met all screening criteria and were either current or former smokers, with a mean pack-year history of 54.7. They were all shown a decision aid. Approximately 43% decided not to be screened despite being at extremely high risk for lung cancer.

In November 2014, we predicted that “the cumulative result of all of these provisions in the CMS decision will be a marked reduction in the number of people at risk who will be screened….”10 This concern proved prescient. Two recent reports show only a 2% to 4% uptake of lung cancer screening in the population at risk.11,12 Inaccurate information contained in multiple decision aids available to patients on Web pages and in print materials from 2014 and 2018 has raised more grave concerns.

What might we do to increase lung cancer screening participation? Is shared decision-making effective? Do available decision aids contain accurate information? How do we fix the system?

Others noted, “It is likely that patients’ decisions not to undergo low-dose computed tomography for lung cancer screening are driven by the high false-positive rate, high chance of incidental findings and subsequent need for invasive procedures, and small chance of benefit.” They suggested that lung cancer screening be “reexamined” and “efforts refocused.”14

Has there been a fair and balanced public policy effort to offer lung cancer screening to those at high risk? The facts cited here suggest that the answer is no.
— Frederic W. Grannis, Jr, MD, and Sheila Ross

Has there been a fair and balanced public policy effort to offer lung cancer screening to those at high risk? The facts cited here suggest that the answer is no. They raise the serious question of whether the shared decision-making process itself, based on inaccurate information in currently available decision aids, is in large part responsible for low uptake. In any case, the mandate for shared decision-making has proved a miserable failure. 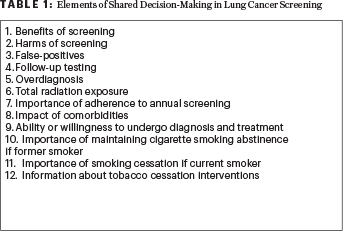 Although the concept of an informed primary care physician sitting down with a patient who has had an opportunity to review accurate information on lung cancer screening, presented in easily understandable format, is admirable, this idealistic policy is very clearly not ready for prime time. Compulsory shared decision-making should now be rescinded. ■

Disclaimer: This commentary represents the views of the authors and may not necessarily reflect the views of ASCO or The ASCO Post.

DISCLOSURE: Dr. Grannis has received travel and accommodation reimbursement for the semiannual I-ELCAP research meetings and has been a paid expert witness in three monitoring lawsuits in New York, California, and Massachusetts against Philip Morris. Ms. Ross reported no conflicts of interest.