Robert A. Kyle, MD, Luminary in Myeloma Research: Journey From a One-Room Schoolhouse to Groundbreaking Research

In this installment of Living a Full Life, guest editor Jame Abraham, MD, FACP, interviewed multiple myeloma pioneer Robert A. Kyle, MD, whose groundbreaking work has changed the practice of hematology. Among his many honors are the David A. Karnofsky Memorial Award from ASCO and the Wallace H. Coulter Award from the American Society of Hematology. They are the highest honors bestowed by these two groups, and he is one of only two persons to receive both awards.

Dr. Kyle was born on March 17, 1928, in Bottineau, North Dakota, a small town situated about 15 miles south of the Canadian border. His father ran a tire shop in town. After several years of selling and repairing tires, he sought a healthier occupation, so he bought a piece of land and began farming.

Guest Editor: Dr. Abraham is the Director of the Breast Oncology Program at Taussig Cancer Institute, and Professor of Medicine, Lerner College of Medicine, Cleveland Clinic.

“I went to a one-room country school. There were 15 to 20 children in the single room and 1 teacher,” said Dr. Kyle, adding, “Neither of my parents had much formal education, which they viewed as a liability they didn’t want my 4 brothers and me to suffer, so they strongly advised us to pursue higher education.”

When he was 11 years of age, seventh-grade students in North Dakota had to pass three state examinations to continue on to eighth and subsequently high school. “Although I was only in sixth grade, my teacher suggested that I take seventh grade examinations to get experience. So I did and got one of the highest grades in the county. After some head scratching, she promoted me to the eighth grade,” he said.

AFTER HIGH SCHOOL, he entered the North Dakota School of Forestry in Bottineau, which was a 2-year junior college. Asked about his decision to pursue a career in medicine, Dr. Kyle recalled that a family friend suggested he become a doctor. As he loved science, he kept the thought in the back of his mind.

“One day when I was in the School of Forestry, my brother, who I was living with at the time, became very ill. He was diagnosed with meningococcal meningitis. His doctor impressed me, and that experience further increased my interest in medicine,” said Dr. Kyle.

After completing 2 years at the School of Forestry, Dr. Kyle entered the University of North Dakota in Grand Forks as a junior. “While there, I contacted the dean of the University of North Dakota Medical School, which had only a 2-year program at the time. Given my grades and MCAT scores, he said I should apply to a 4-year medical school, noting that if I wanted to become a real doctor, I should apply to Northwestern, his alma mater.”

On what lies ahead in myeloma therapy: “We should be very optimistic about the future of myeloma treatment and the exciting new agents in the pipeline.”

On avoiding physician burnout: “In today’s electronic world, doctors are connected to their work 24/7. I see young professionals at meetings who are constantly checking their phones or tablets for communications or data. You need to get away from the challenges of cancer care or you can face burnout. Find a passion outside of the clinic.”

On a career in medicine: “The bottom line for success in medicine and research is to maintain your passion about what you do.”

“A couple of very impressive members of the faculty had trained at the Mayo Clinic, so I applied there and was accepted,” said Dr. Kyle. “The program required 6 months of laboratory work. One of the options was hematology, something I knew little about, so I signed up. My project involved acquired hemolytic anemia in chronic lymphocytic leukemia and lymphoma. I passed the written exam for my Master’s of Science in Medicine and then wrote a thesis.”

He continued, “Two things happened subsequently on the hematology hospital service that altered my future scientific life. First, I saw an electrophoretic pattern which I had never seen before and asked the consultant on the service what that meant. He didn’t know other than that a spike was often seen in multiple myeloma and Waldenström’s macroglobulinemia and suggested that I “look into it.” Serum protein electrophoresis was a new test in clinical laboratories, but over 6,000 electrophoretic patterns had been performed at the Mayo Clinic. I looked at all of them and devised a formula based on height vs width of the spike. I discovered that if the height was greater than 4 to 1 over the width at the midpoint of the peak, then that patients usually had myeloma or macroglobulinemia; in contrast, if the ratio was lower, that patient most likely had a chronic infection or an inflammatory process. So I wrote the paper, which was published in JAMA.”1

The other influential event came when a patient was admitted to the hematology service with a diagnosis of multiple myeloma. “A consulting dermatologist had performed a skin biopsy that disclosed amyloid. It struck me that some of the patients I had seen with smaller spikes on the electrophoretic patterns had systemic amyloidosis. I reviewed all 81 cases of primary amyloidosis seen at the Mayo Clinic from 1935 to 1959, and published a paper.2 I made the point that all these patients had abnormal plasma cells in the bone marrow and that some of them had frank multiple myeloma. Those two events changed my scientific career.” 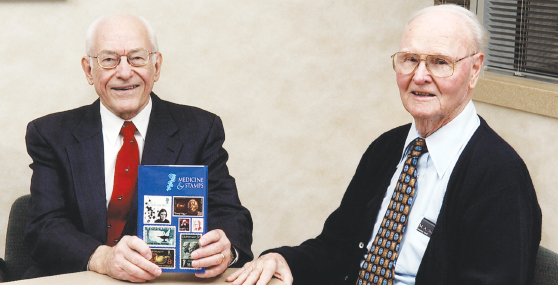 On to Boston for More Training

SEEKING MORE TRAINING in hematology, Dr. Kyle went to Tufts University in Boston for a fellowship under William Dameshek, MD, one of the leading clinical hematologists in the nation. “After a few months, Dr. Dameshek invited me to work occasional afternoons in his private office. I saw patients and learned to write a letter to the referring physician that same day. It was a good habit to develop. Unfortunately, I learned that there were more patient records in Dr. Dameshek’s ‘Deceased’ filing cabinet than in the ‘Living’ filing cabinet. That reflects what happened to most hematology patients at that time,” said Dr. Kyle.

Dr. Kyle recalled a memorable event during his fellowship at Tufts. “Dr. Dameshek sent a couple of fellows to the Mary Imogene Bassett Hospital in Cooperstown, New York to learn bone marrow transplantation from E. Donnall Thomas, MD. When I returned to the Mayo Clinic, I saw a 7-year-old girl with severe aplastic anemia. She had an identical twin sister who, of course, was the perfect donor for a transplant. We performed the transplant, and the recipient is still alive. In fact, she is now a major spokesperson for bone marrow transplantation.”

After spending 2 years at Tufts University, Dr. Kyle was offered a position at the Mayo Clinic in Rochester. “I noted that a number of Dr. Dameshek’s previous fellows, who had elected to stay in Boston, were struggling to develop their own private practices even after a decade. When this offer came from Rochester, I accepted without a second thought. I liked Rochester and the people at the clinic. I came back in August 1961 and have been here ever since.” 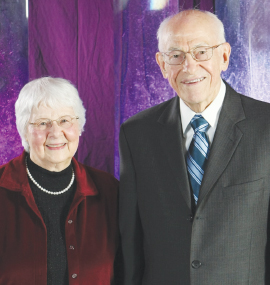 Dr. Kyle and his wife, Charlene.

DR. ABRAHAM ASKED Dr. Kyle to describe a salient remembrance from the arc of his career: “During the last 40 years of the 20th century, only two notable things happened in the treatment of multiple myeloma: the introduction of melphalan and bone marrow transplantation. Then, in the 1990s, a patient came to me with multiple myeloma. I advised a combination of alkylating agents; he responded, relapsed, and finally became refractory to all available therapy.”

Dr. Kyle remembered, “His wife was an incredible advocate who searched the literature for answers. She learned of an antiangiogenic drug called endostatin, which Dr. Judah Folkman was studying at Harvard. Dr. Folkman told her that endostatin was only in early-stage research, but another antiangiogenic drug, thalidomide, was available at the National Cancer Institute under the compassionate use program.”

He continued, “The patient’s wife contacted Bart Barlogie, MD, who requested the drug and treated her husband. Unfortunately, the patient died a few months later of myeloma, but Dr. Barlogie then treated a refractory myeloma patient who responded and then went on to treat more than 80 cases of refractory myeloma with thalidomide and reported that about one-third had significant responses. That was the beginning of the novel agents that are now markedly improving the outcomes of these patients with myeloma. We should be very optimistic about the future of myeloma treatment and the exciting new agents in the pipeline.” 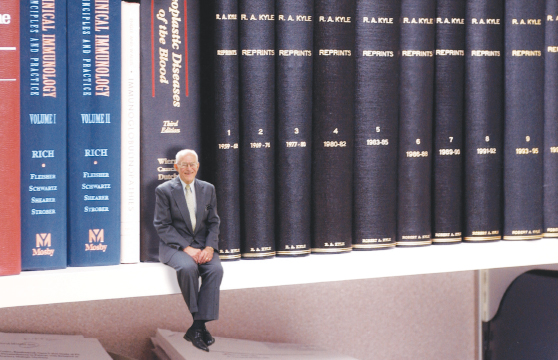 Dr. Kyle with reprints of his work.

WHEN THE DISCUSSION turned to physician burnout, Dr. Kyle stressed, “The most important advice I have for young physicians is that they choose a specialty they are intensely interested in. Passion makes hard work and long hours less onerous. Also, today’s oncologists are pressed to see so many patients that one runs the risk of losing sight of the patient sitting in the exam room. You must be certain to take the time and effort to get to know your patient with cancer on a personal level.”

He added, “In today’s electronic world, doctors are connected to their work 24/7. I see young professionals at meetings who are constantly checking their phones or tablets for communications or data. You need to get away from the challenges of cancer care or you can face burnout. Find a passion outside of the clinic. I’ve found mine, but it’s an individual choice, and sometimes you just fall into something.”

“IN 1965, I went to examine a patient and felt a twinge in my lower back. I kept working, but the next morning I was in so much pain I had to have my wife, Charlene, tie my shoelaces. I ended up in the hospital for 39 days,” Dr. Kyle remembered.

“I had had a passing interest in stamps, so I decided to explore stamp collecting more closely. I reviewed the multiple volumes of the Scott stamp catalogs, which have every stamp from every country in the world. I took it to another level and wrote a number of papers on blood transfusion as well as cancer and stamps,” he noted.

“The most important advice I have for young physicians is that they choose a specialty they are intensely interested in. Passion makes hard work and long hours less onerous.”
— Robert A. Kyle, MD

“After I received a little recognition from exhibiting my stamp collection at national shows, a JAMA editor asked me to edit previously published stamp vignettes for a book they planned to publish. I asked my friend, Dr. Marc Shampo, who also was interested in stamps, to help. Then JAMA asked us to continue writing stamp vignettes, until Mayo Clinic Proceedings took over about 15 years later and continues to publish the vignettes to the present time. I don’t spend as much time on it anymore, but it’s still an interest of mine,” Dr. Kyle said.

“THE BOTTOM LINE for success in medicine and research is to maintain your interest and passion about what you do. It is a wonderful privilege to interact with our patients, and that’s something that needs to be talked about more. I don’t see patients anymore, but I am a supplemental consultant, which allows me to continue to contribute to the great field of multiple myeloma, Waldenström’s macroglobulinemia, and amyloidosis,” said Dr. Kyle.

Asked about leisure activities that help him balance work and his personal life, Dr. Kyle responded, “Charlene and I have always traveled extensively. We still do, but the trips aren’t as long. We have taken a lot of driving trips to national parks and other areas of geographic or historical interest in Europe, Canada, Australia, and the United States. I’m also hard at work on a memoir. So it’s a full life, and I’m thankful to engage in things that still make a difference.” ■