NORMAN WOLMARK, MD, and Bernard Fisher, MD, received the Society of Surgical Oncology (SSO) Distinguished Service Award for their work leading the National Surgical Adjuvant Breast and Bowel Project (NSABP). Dr. Wolmark, who succeeded Dr. Fisher as Chair of the NSABP and is currently Group Chair of NRG Oncology, accepted the award on behalf of himself and Dr. Fisher, Distinguished Service Professor at the University of Pittsburgh, at the SSO Annual Cancer Symposium held recently in Chicago.

“I MUST pay tribute to [Bernard Fisher], my mentor, my colleague, my friend who could not be here today, and without whom, I could not be here today,” Dr. Wolmark said. “Bernie instilled me with a passion for clinical trials. He blazed the trail for the rest of us to follow. He convinced me that the randomized prospective clinical trial was not simply to test treatment A vs treatment B, but it was to test biologic hypotheses, often exclusive, to move the state of the art forward. The retreat from radical mastectomy and the ascent of systemic therapy are inexorably intertwined. One would not have occurred without the other. It laid the groundwork, the framework, for this era that we call personalized medicine, in that it is hypotheses testing.”

“[Dr. Bernard Fisher] blazed the trail for the rest of us to follow. He convinced me that the randomized prospective clinical trial was not simply to test treatment A vs treatment B, but it was to test biologic hypotheses, often exclusive, to move the state of the art forward.”
— Norman Wolmark, MD

THE NSABP randomized its first patient on April 4, 1958, Dr. Wolmark noted. Sixty years and “130,000 patients later, we are here celebrating this event. If awards are to be given, surely it is to these 130,000 patients who selflessly gave of themselves, so the state of the art could be furthered,” he remarked. Professor and Chairman of Human Oncology at Drexel University School of Medicine in Philadelphia, and faculty member at Allegheny Health Network in Pittsburgh, Dr. Wolmark also serves as Chair of the NSABP Foundation, a not-for-profit academic research organization.

The first NSABP study was a prospective trial showing that adjuvant chemotherapy could reduce the recurrence rate after breast cancer surgery. After Dr. Fisher became Chair in 1967, the NSABP conducted large-scale multi-institutional randomized clinical trials that led to less radical surgery for breast cancer and demonstrated that when used as a preventive agent, tamoxifen significantly reduces breast cancer in women at high risk. His research “has transformed current surgery, radiation therapy, and systemic adjuvant chemotherapy and hormonal therapy modalities for the treatment of breast and other cancers,” an SSO statement noted. “Perhaps Dr. Fisher’s most important contribution has been the establishment of the scientific approach to the understanding and treatment of breast cancer that has led to improvement in both survival rate and quality of life for women with the disease.” Under his leadership, NSABP also broadened its focus to include studies on adjuvant chemotherapy after surgical resection of colorectal cancer, which were further advanced when Dr. Wolmark became NSABP Chair in 1994. 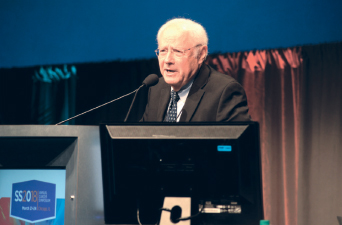 Under Dr. Wolmark’s leadership, the NSABP conducted a number of paradigm-shifting breast cancer trials, including studies on HER2-directed therapy, sentinel lymph node biopsy to guide breast cancer treatment, and the use of raloxifene as chemoprevention. Dr. Wolmark guided the NSABP through the merger with the Radiation Therapy Oncology Group, and the Gynecology Oncology Group, to form the NRG Oncology Clinical Trials Group.

THIS YEAR, the Distinguished Service Award, presented for outstanding contributions to surgical oncology through service to SSO, research, or enhancement of clinical care or health policy, was renamed the Charles M. Balch, MD, Distinguished Service Award. Dr. Balch held multiple leadership roles with SSO, including President in 1991. He was also founding Editor-in-Chief of the Annals of Surgical Oncology.

Dr. Wolmark noted that he considered Dr. Balch “a compatriot, a friend, a co-conspirator in clinical trials” and receiving an awarded named for Dr. Balch “makes this all that much more noteworthy an award for me.” ■