The ASCO Post’s Integrative Oncology series is intended to facilitate the availability of evidence- based information on integrative and complementary therapies commonly used by patients with cancer. In this installment, authors Gary Deng, MD, PhD, and Jyothirmai Gubili, MS, present the case study of a woman with a history of endometrial cancer and urinary tract infections (UTIs), and they discuss evidence concerning the role of cranberry in managing UTIs as well as its reported anticancer effects.

M.C. is a 55-year-old woman with a history of stage I endometrial cancer, diagnosed and curatively treated 5 years ago. Since then, she has been having urinary tract infections from time to time. They have become more frequent lately. The patient is otherwise healthy and takes no medications on a regular basis.

Nitrofurantoin is offered but declined by the patient, due to fear of chronic use of antibiotics. The patient asks whether there is anything “natural” that would be helpful, in addition to local hygienic care. She asks specifically about cranberry extract, as she has heard from friends that it can be helpful.

Cranberry is a woody perennial vine native to the northeastern part of North America. Native Americans were the first to use cranberries as food who consumed the red, edible fruits in both fresh and dried forms. The berries were also used medicinally to treat fevers, wounds, swelling, blood disorders, and seasickness.

Today, cranberries continue to be popular for preventing urinary tract infections (UTIs)—the vast majority of which are caused by the bacterium Escherichia coli—and Helicobacter pylori infections, which can lead to gastric cancer. They are also used as antioxidants.

Current clinical evidence on the ability of cranberry to prevent UTIs is mixed. And data to determine its value in treating existing infections are lacking. But some studies have shown that cranberries are useful in preventing dental plaque formation and subsequent gum disease, as well as in suppressing H pylori infection. Its use should be based on a risk/benefit assessment against alternatives.

Because cranberries are hard and bitter, the majority are processed into sauces, juices, drinks, or jams, which are available online and in health food stores. They are also marketed as dietary supplements in the form of extracts, capsules, or tablets. 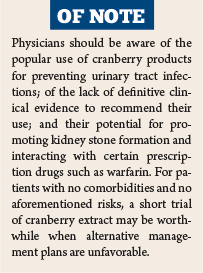 Findings from some studies suggest the utility of cranberry extracts in preventing UTIs in women,7 children,8 and patients with prostate cancer undergoing radiation therapy.9,10 But a trial involving older adults did not report such benefits,11 and a subsequent analysis showed increased costs with no significant reduction in UTI rates in a geriatric nursing home environment.12 Just-published data from randomized studies involving patients having pelvic surgery13 and patients with hip fractures undergoing urinary catheterization14 also indicate the ineffectiveness of cranberry in reducing postoperative bacteriuria.

In addition, cranberry extracts and proanthocyanidins have been reported to exert antiproliferative effects against cancers of the esophagus, stomach, colon, bladder, and prostate, as well as glioblastoma and lymphoma, in vivo.18 Human trials have yet to be conducted.

The anticancer effects of cranberry are thought to be exerted via many different mechanisms, which include inhibition of cancer cell growth by decreasing cyclins, cyclin-dependent kinase expression,22 and matrix metalloprotease activity.23 Dose-response inhibition of gastric cancer cells was shown to be in part due to decreased expression of proliferating cell nuclear antigen induction of apoptosis.24 In neuroblastoma cells, proanthocyanidins induced apoptosis and reactive oxygen species generation, and increased retention of cyclophosphamide, with synergistic cytotoxic benefits.25

Consumption of large amounts of cranberry juice (3 cups daily) has been associated with nausea, vomiting, and diarrhea.27

Internal hemorrhage and subsequent death were reported in two patients with the concurrent use of warfarin and cranberry juice.31,32

Cytochrome P450 (CYP) substrates: Cranberry inhibits enteric CYP3A activities and may interfere with the absorption of substrate drugs.37 It also inhibits CYP2C9 in vitro, but this activity was not observed in humans.38

Cyclosporine: In a randomized clinical trial, 240 mL of cranberry juice had no clinically significant effect on the disposition of a 200-mg dose of cyclosporine.39

Cranberry use should be limited in patients with a history of nephrolithiasis, because it can increase urinary oxalate excretion and can promote the formation of the most common type of kidney stones (ie, calcium oxalate).26 ■