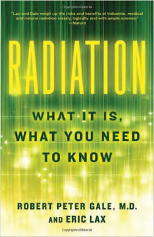 Title: Radiation: What It Is, What You Need To Know

For many, the word “radiation” conjures up images of mushroom clouds and the nightmarish nuclear disaster at Chernobyl. It also brings to mind those pesky dental x-rays and lifesaving cancer treatments. However, to most people, radiation is a mysterious invisible power to be feared and embraced all at once. Since all humans are radioactive and live in a radioactive world in a radioactive solar system, perhaps we should know more about radiation, and that’s the mission of a book aptly titled Radiation: What It Is, What You Need To Know.

Written by two accomplished authors, Robert Peter Gale, MD, and Eric Lax, Radiation delivers exactly what its title proffers to would-be readers. The problem with the title is that it makes the book sound like a science manual—a dry, technical read. Surprisingly, it is actually a thrillingly educational book and a good read to boot.

Has Anyone Seen My Radioactive Material?

The tantalizing introduction begins with the intrigue and pace of a spy novel, telling the story of two Brazilian radiologists in 1985 who, after a dispute with their landlord, had to leave their radiation therapy machines—containing cobalt-60 and cesium-137—behind. What follows is part Keystone Cops, as the therapy machines go missing, and part high-stakes medical drama, as people start turning up with radiation poisoning.

Also in the introduction is a sobering discussion of radon-222, which can get trapped in unventilated basements or in groundwater, where it evaporates and is inhaled when people in the region shower. The Environmental Protection Agency estimates that radon causes about 21,000 lung cancer deaths per year in nonsmokers.

After a quick consideration of the Fukushima Daiichi nuclear disaster in Japan, the authors write, “The stakes for not making the right decisions about radiation are so high that we must equip ourselves with as much knowledge as we can….” They’ll be no argument there, from anyone who has read this excellent introduction.

Radiation is a small book by science-book standards, weighing in at 233 pages, not counting notes and index. It is small but incredibly dense with information, some of which will go over the heads of lay readers without a background in science. It is structured in eight tightly drawn chapters, a summation, and a highly informative question-and-answer section.

[The chapter on ‘Radiation and Cancer’] deals with things so small that it boggles the mind, but the authors skillfully bring readers deep into the process, allowing them to resurface with a clear understanding.
—

Chapter 1, “Assessing the Risks,” is a succinct exploration of the risks of radiation, which takes a measured look at low-dose exposures such as certain cancer screening procedures. This is a perfect setup for chapter 2, “Radiation From Discovery to Today,” which gives the reader a brief but stimulating history of the discovery of radiation and many of the principals involved in the early research, including familiar giants such as Marie Curie and Wilhelm Röntgen.

Of interest to readers of The ASCO Post, this chapter also delves into the leukemias related to radiation exposure after the atomic bombs were dropped on Japan. It is informative and darkly suggestive of humanity’s capability for destruction.

For The ASCO Post readers, chapter 4, “Radiation and Cancer,” will be engaging. It opens with a short explanation about the effect that ionizing radiation can have on the 10 feet of our coiled DNA. Using clever analogies, they describe how radiation can invade a cell’s nucleus and its DNA, reminding the reader that to disrupt one’s DNA and initiate carcinogenesis, a “dart” of radiation has to score a direct hit in a place that will cause cancer. This chapter deals with things so small that it boggles the mind, but the authors skillfully bring readers deep into the process, allowing them to resurface with a clear understanding.

Dr. Gale and Mr. Lax tackle the contributions of smoking and ultraviolet radiation in causing skin cancers. “When someone lights a cigarette and draws in the smoke, the temperature of the tobacco in the middle of the red ember is about 1,500 degrees Fahrenheit…. This aerosolizes the polonium-210 [a highly radioactive element], which is then inhaled directly into the bronchial tree and lungs.” This should be boiled down into lay language for antismoking campaigns.

Equally interesting is the section on skin cancer. “[Ultraviolet A (UVA)] contributes to skin cancer and may directly cause the damage that begins a basal cell or squamous cell carcinoma. Tanning booths give off about 12-times as much UVA as the Sun. They have been declared a carcinogen by several health authorities, including the World Health Organization,” the authors warn. Along with these dramatic examples of radiation and public health issues, the authors dissect the three forms of ultraviolet radiation and how they relate to the carcinogenic process—valuable information for health-care providers.

The authors also take on the thorny issues of radiation’s role in disease and birth defects and provide some perspective on food irradiation. This is a top-notch myths-and-facts chapter that intelligently explains how radiation affects our bodies.

The debate over whether irradiating food is a good or bad thing incites all kinds of emotions. The authors point out that about 2 million people die each year due to infections of the gastrointestinal tract, which can be traced back to bacteria in food and water.

“Yet many people say they would rather be exposed to these bacteria than eat food that has been radiated to kill them. This fear mostly stems from the misconception that radiated food can become radioactive,” they continue. In clear prose, they strive to educate people on real dangers and dispel myths. Also in this chapter, they examine cancer-screening tests and radiation therapy, again using science to dispel myths about radiation’s harm.

Another contentious issue tackled in this book is nuclear power. Those opposing nuclear energy have some fairly recent nuclear disasters to accommodate their position. However, the authors begin this section by outlining the dangers and consequences of fossil fuels, offering an impressive list of statistics. The United States burns twice as much coal as any other nation to generate electricity. One coal-burning plant emits 500 tons of toxic small airborne particles into the air each year, causing a plethora of diseases. And if that’s not enough of an argument against fossil fuels, they note that each plant also produces 193,000 tons of toxic sludge per year from smokestack scrubbers.

“It is estimated that if the entire U.S. electricity use were met by nuclear reactors, the high-level radioactive waste volume from 350 years of production would fit into a cube measuring 200 feet on a side,” write the authors. They don’t advocate for nuclear power, but the science, safety, and greenness of properly managed nuclear power plants make coal and oil look primitive and harmful on a number of levels.

The book ends with a very thoughtful “Summing Up” chapter and a Q&A section that educates and debunks misconceptions about radiation. At times, this book demands that the reader pause and think, maybe even reread and search the Web for definitions, but every minute spent on this fine book is both fun and edifying. Radiation is highly recommended. ■