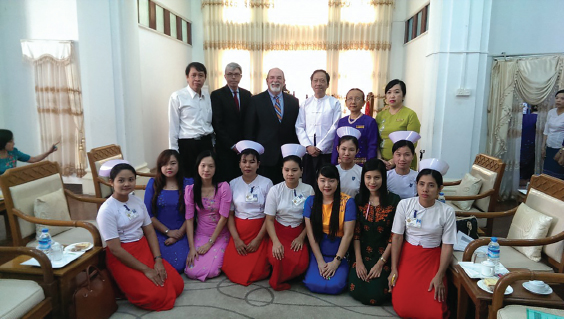 We need more oncologists and physicians from related fields to collaborate on cancer control. We’ve made so much progress in cancer and heart disease in high-income countries, but it is not being extended in developing countries.

The greatest health threat to people living in low- and middle-income countries is no longer infectious diseases like HIV/AIDS, which has seen a 33% decline in the global rate of new infections since 2001.1 It is the rise of noncommunicable diseases (including cancer, cardiovascular disease, and diabetes), which are now the leading cause of death and disability in low- and middle-income countries, killing more than 8 million people before the age of 60 in 2013 alone, according to a new report by the Council on Foreign Relations (CFR), an independent nonprofit think tank headquartered in New York.2 In many of these countries, especially those in Africa, the proportion rises to 80% or higher, the report found.

Over the past 15 years, mortality rates from noncommunicable diseases in these countries have increased 53%—significantly faster than the rate of population growth—fueled by a constellation of factors, including urbanization, limited access to preventive care, greater exposure to air pollution, poor nutrition, and increasing rates of tobacco use caused by limited tax and regulatory systems. According to the report, the increase in cigarette smoking in low- and middle-income countries, including India, Indonesia, Pakistan, and Vietnam, has made lung cancer the most common cancer and cause of death from cancer.

Deaths from other cancers are on the rise, too, including ones that are largely treatable, curable, and on the decline in the United States and in other high-income countries. The report found that in poorer countries between 1990 and 2013, premature deaths from breast cancer and leukemia grew an astounding 90% and 25%, respectively, largely the result of too little access to diagnostic and curative care. (Approximately two-thirds of all cancer deaths occur in low- and middle-income countries, where the 5-year survival rates are lower than in high-income countries.3)

While increasing incomes and reductions in infectious diseases like HIV/AIDS, malaria, and tuberculosis in poor countries have resulted in people living long enough to die of diseases that typically affect older people, they do not explain why so many are developing noncommunicable diseases at much younger ages and with such worse outcomes than populations in wealthier countries. The reason for the shift, say experts, is that noncommunicable diseases are outpacing the ability of developing nations to put into place the health-care systems necessary to prevent and treat these chronic diseases.

“Fewer infants and children are dying, and people in developing countries are living longer, but those improvements in longevity have happened without the same gains in wealth and improvements in health-care systems you saw in higher-income countries,” said Thomas J. Bollyky, Senior Fellow for Global Health, Economics, and Development at the Council on Foreign Relations, and Project Director of The Emerging Global Health Crisis: Noncommunicable Diseases in Low- and Middle-Income Countries report.

“All the governments of sub-Saharan Africa spend about as much on health care per year as the government of Poland—about $30 billion,” he continued. “The same factors that drive other global health problems are driving noncommunicable diseases in these countries: persistent poverty and limited health-care systems.”

In addition to the human toll that rising rates of noncommunicable diseases will inflict on poor countries—including large numbers of people who will get sick, suffer longer, require more medical care, and die young—the economic consequences in these countries are equally staggering. According to the CFR report, the World Economic Forum projects that the noncommunicable disease epidemic will result in a loss of $21.3 trillion in developing countries over the next 2 decades—a cost that is nearly equal to the total aggregate economic output of these countries in 2013 ($24.5 trillion).

The remedies to blunt the noncommunicable disease epidemic, said Mr. Bollyky, are well known and have been successfully used in the United States and other high-income countries to curtail these diseases, especially cancer. “Our task force looked at the interventions to reduce [noncommunicable diseases] in low-income countries, and the ones that are relevant for cancer include establishing better tobacco control; increasing vaccination rates for human papillomavirus (HPV) and hepatitis B, which are relevant for cervical cancer and liver cancer; and adapting chemotherapeutics and diagnostic tools to the lower-resource setting,” he said. Devoting more resources to the development of population-based registries to track the incidence, mortality, and survival rates of different types of cancer are also fundamental to improving cancer prevention and treatment, he added.

Leveraging resources to address the health-care needs of low- and middle-income countries is the goal of the National Cancer Institute’s Center for Global Health. Established in 2011, the Center is tasked with improving global health outcomes through sharing knowledge gained in cancer research and cancer control, and developing research networks to facilitate collaboration to reduce cancer rates in developing countries.

“What we are trying to do is make sure that what we already know about reducing cancer globally is rolled out to these countries as effectively as possible, and that dovetails with the findings in the Council on Foreign Relations report,” said Edward J. Trimble, MD, MPH, Director of the Center for Global Health. “We need to help countries integrate into their public health practices what we already know about how to prevent cancer, how to screen for cancer, and how to treat cancer.”

However, lack of funding to combat noncommunicable diseases in these countries—the United States does not have a dedicated program or budget to address noncommunicable diseases globally—threaten to slow these efforts. “Unfortunately, much of the budget of the government agencies tasked with disease prevention, such as the Centers for Disease Control and Prevention and the [U.S. Agency for International Development], is earmarked for specific categories. It can be hard for them to transfer money out of those categories without congressional approval,” said Dr. Trimble.

Recognizing the health crises noncommunicable diseases are causing in low- and middle-income countries, 2 years ago the Conquer Cancer Foundation of ASCO announced the establishment of the International Innovation Grant program to help stem the trend. The program awards 1-year grants of up to $20,000 to fund novel and innovative research projects that can have a significant impact on cancer control in these countries.

“Our goal is not to dictate the methods that physicians in other countries use to improve screening or treatment for the patients that they serve,” said W. Charles Penley, MD, FASCO, Chair of the Conquer Cancer Foundation Board of Directors and a medical oncologist in Nashville. “Only physicians familiar with local practices and resources know best how to address the local care needs. A $20,000 grant sounds rather small, but it can make a world of difference where there is great need. Our grant selection committee reviews the proposals that we receive in the context of the current health status in a particular country, considering the impact that successful completion of the project will have on the local population, then steps back and allows the physicians and nurses on the ground to do the good work.”

Mr. Bollyky agrees that the participation of cancer organizations and societies is vital to providing on-the-ground support to reduce noncommunicable disease prevalence. “It will take a combination of things to improve care. One way is to have ongoing global health initiatives to integrate interventions or programs to address cancer in lower- and middle-income countries. Certainly, we need more oncologists and physicians from related fields to collaborate on cancer control. We’ve made so much progress in cancer and heart disease in high-income countries, but it is not being extended in developing countries. In many of these settings, everything is missing, including personnel, equipment, and basic chemotherapies,” said Mr. Bollyky.

To overcome these challenges, the CFR report recommends that the United States and its international partners examine their global health priorities and develop a sustainable plan for collective action on noncommunicable diseases in developing countries. ■

In 2014, the Conquer Cancer Foundation awarded four inaugural International Innovation Grants to aid novel research projects in Colombia, Myanmar, Nigeria, and Tanzania. The program, which supports a 1-year research grant of up to $20,000 to a nonprofit organization or governmental agency in a low- ...