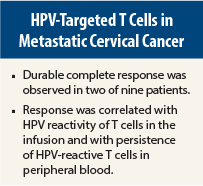 In the protocol, nine patients with metastatic cervical cancer who had received platinum-based chemotherapy or chemoradiotherapy received a single infusion of tumor-infiltrating T cells, grown from tumor fragments following excision of the tumor, selected when possible for HPV E6 and E7 reactivity. Patients underwent lymphocyte-depleting chemotherapy prior to infusion and received aldesleukin after infusion.

Objective response was observed in three of the nine patients, including two complete responses that were ongoing at 15 and 22 months after treatment. The partial response was 3 months in duration. HPV reactivity of T cells in the infusion was positively correlated with likelihood of response on interferon gamma production, enzyme-linked immunospot, and CD137 upregulation assays (P = .02 for all three assays).  The level of HPV-reactive T cells in peripheral blood at 1 month after treatment was also positively associated with likelihood of response (P = .02).

The investigators concluded: “Durable, complete regression of metastatic cervical cancer can occur after a single infusion of HPV-[tumor-infiltrating lymphocytes]. Exploratory studies suggest a correlation between HPV reactivity of the infusion product and clinical response. Continued investigation of this therapy is warranted.”

Christian S. Hinrichs, MD, of the National Cancer Institute-Surgery Branch, is the corresponding author for the Journal of Clinical Oncology article. ■

Disclaimer: The study was supported by the National Institutes of Health and the Milstein Family Foundation.