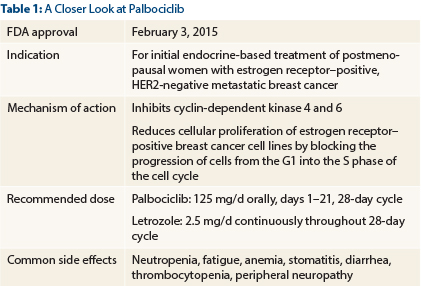 Table 1: A closer look at palbociclib 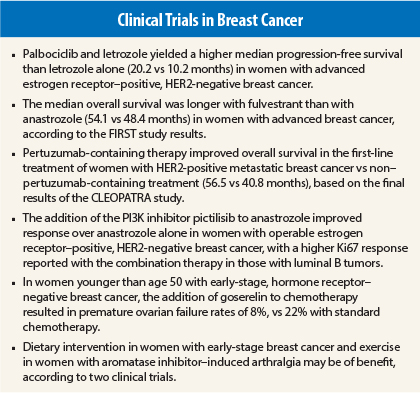 The FIRST study is the second trial to show an overall survival advantage for fulvestrant (500 mg) over another endocrine therapy. If the phase III FALCON study confirms these findings, Robertson and colleagues believe that fulvestrant should be considered for approval as a first-line agent in the treatment of advanced breast cancer. —Jame Abraham, MD, FACP

With the field of breast oncology as complex as ever, a brief update of the latest findings impacting breast cancer treatment seems timely. To that end, I have assembled highlights from a collection of newsworthy studies featured over the past year and into early 2015.

Part 1 of this review, which appeared in the April 10, 2015, issue of The ASCO Post, focused on genetics and adjuvant therapies in breast cancer. In Part 2 of this two-part series, I will focus on newer therapeutic options for metastatic disease (fulvestrant [Faslodex], palbociclib [Ibrance], pertuzumab [Perjeta], and pictilisib) as well as several survivorship issues (fertility preservation, diet, and exercise).

On February 3, 2015, palbociclib, an oral, highly selective inhibitor of cyclin-dependent kinase (CDK) 4 and 6, was granted accelerated approval by the U.S. Food and Drug Administration (FDA) in combination with letrozole for the initial endocrine-based treatment of postmenopausal women with estrogen receptor–positive, HER2-negative metastatic breast cancer (see Table 1). The supporting data for this approval came from the randomized phase II PALOMA-1/TRIO-18 trial, which included 165 women.1

The randomized, phase II FIRST study compared 500 mg of fulvestrant with anastrozole in 205 patients with advanced hormone receptor–positive breast cancer.2 These women had not received prior endocrine therapy for their advanced disease.

Clinical Perspective: According to the investigators, the FIRST study is the second trial to show an overall survival advantage for fulvestrant (500 mg) over another endocrine therapy. If the phase III FALCON study confirms these findings, Robertson and colleagues believe that fulvestrant should be considered for approval as a first-line agent in the treatment of advanced breast cancer.2

Pertuzumab in combination with trastuzumab (Herceptin) and docetaxel was approved for the treatment of patients with HER2-positive metastatic breast cancer who have not received prior anti-HER2 therapy or chemotherapy for metastatic disease. This approval was based on the CLEOPATRA study, which reported improvement in progression-free survival in more than 800 women.3

Key Findings: The results of the final overall survival analysis from the CLEOPATRA study were reported at the 2014 ESMO Congress4 and published recently in The New England Journal of Medicine.5 First-line treatment with the three-drug combination significantly improved overall survival in these women compared with trastuzumab, docetaxel, and placebo (56.5 vs 40.8 months). This 15.7-month difference was a statistically significant improvement in overall survival in favor of the pertuzumab arm (HR = 0.68, 95% CI = 0.56–0.84, P = .0002).

Clinical Perspective: “The median overall survival of 56.5 months is unprecedented in first-line, and this substantial improvement confirms the pertuzumab-containing regimen as standard of care in this setting,” stated Sandra Swain, MD, Medical Director of the Washington Cancer Institute at MedStar Washington Hospital Center, Washington, DC, in a press release.

Schmid and colleagues presented the first report of a preoperative window of opportunity study evaluating the PI3K inhibitor pictilisib in combination with anastrozole in the treatment of women with estrogen receptor–positive, HER2-negative operable breast cancer at the 2014 San Antonio Breast Cancer Symposium.6 In the OPPORTUNE study, 73 postmenopausal patients were randomly assigned to receive 2-week preoperative treatment; two-thirds were given anastrozole and pictilisib, and the other third, anastrozole alone.

Key Findings: In this patient population, the antiproliferative response to anastrozole was increased with the addition of pictilisib over anastrozole alone. According to a preplanned subgroup analysis, there also seemed to be an interaction in response to the two-drug treatment with molecular subtype and Ki67 level. Furthermore, patients who had luminal B tumors had a higher Ki67 response with anastrozole and pictilisib than with anastrozole alone (83% vs 38%), according to subset analyses. As for patients who had luminal A tumors, the Ki67 response appeared to be similar for both treatment groups.

Clinical Perspective: Preoperative studies such as the OPPORTUNE trial have emerged as a strategy to evaluate novel treatments in women with estrogen receptor–positive breast cancer.6 Such studies may potentially help to characterize the optimal target population for such treatments.

Although improved diagnostics and therapeutics have led to longer lives for a greater number of breast cancer survivors, issues such as fertility, diet, and exercise and their roles in survival and quality of life for these patients are still being clarified. The following studies addressed some of these issues.

The randomized phase III POEMS-SWOG S0230 trial evaluated whether premature ovarian failure could be reduced by the administration of a luteinizing hormone–releasing hormone analog (goserelin [Zoladex]) with chemotherapy in women with early-stage, hormone receptor–negative breast cancer.7,8 A total of 257 patients (younger than age 50) with stages I to IIIA disease received standard cyclophosphamide-containing chemotherapy with or without monthly goserelin.

Key Findings: Moore and colleagues presented their data on the 218 patients evaluated thus far during a Plenary Session at the 2014 ASCO Annual Meeting7 and recently published their findings in The New England Journal of Medicine.8 They found more success in attempting and achieving pregnancy with the addition of goserelin, with premature ovarian failure rates of 22% with standard chemotherapy and 8% with the addition of goserelin. In addition, there were 13 pregnancies among those who received standard chemotherapy and 22 pregnancies among those who received goserelin (odds ratio = 2.22, 95% CI = 1.00–4.92, P = .05).

Clinical Perspective: Not only were there fewer cases of premature ovarian failure and more pregnancies with the addition of goserelin to standard chemotherapy, an exploratory analysis suggested potential improvement in both disease-free and overall survival as well.7 This is clearly a practice-changing study with significant clinical implications.

The final survival analysis of this trial was presented at the 2014 San Antonio Breast Cancer Symposium.9 Of the more than 2,400 women between the ages of 48 and 79 years with early-stage breast cancer who took part in the trial, 975 patients received dietary intervention (targeting fat intake reduction [target 15% calories from fat] while maintaining nutritional adequacy) along with their standard cancer therapy, and the others did not. The dietary intervention consisted of eight biweekly individual counseling sessions by centrally trained registered dietitians, with subsequent every-3-month dietitian contacts.

Key Findings: After a median follow-up of 15 years, the lifestyle dietary intervention was associated with weight loss but not a significant increase in overall survival in women with resected breast cancer who received conventional cancer therapy.9 However, exploratory analyses suggested a favorable lifestyle influence on survival in the hormone receptor–negative subgroup and during active intervention.

The final study centers on the impact of exercise vs usual care for aromatase inhibitor–induced arthralgia in previously inactive breast cancer survivors.10 Irwin and colleagues conducted this yearlong randomized trial, which included 121 breast cancer survivors who received an aromatase inhibitor and reported arthralgia. Half of these women received usual care, and the others underwent aerobic exercise sessions (up to 90 minutes per week with no strength training).

Key Findings: The worst joint pain scores decreased by 1.6 points (29%) at 12 months among the exercising women, compared with a 0.2-point increase (3%) among those receiving usual care (P < .001). In addition, pain scores on other standard indices and questionnaires decreased at 12 months in women randomly assigned to exercise.

Clinical Perspective: We clearly know that diet and lifestyle play a key role in breast cancer incidence, survival, and quality of life. Although we are awaiting confirmatory data, all breast cancer survivors should be counseled about the importance of diet and exercise. ■

Zanubrutinib vs Ibrutinib in Relapsed or Refractory CLL