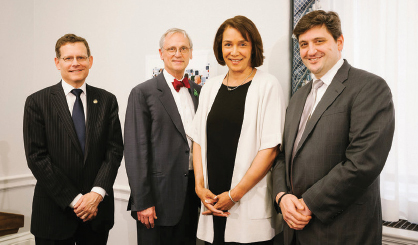 This [innovation in cancer care delivery] is the innovation that brings greatest value to our practices, our patients, and their families, and the lifesaving treatments that everyone wants to see.

On March 11, ASCO released its first-ever comprehensive assessment of the daunting challenges facing America’s ability to continue to deliver high-quality care to all patients with cancer. ASCO President Clifford A. Hudis, MD, FACP, introduced the assessment at a Congressional news briefing in Washington, DC. He was joined by Rep. Earl ­Blumenauer [D-OR], Carolyn B. Hendricks, MD, PA, in private practice in Bethesda, Maryland, and Blase Polite, MD, Chair of the ASCO Health Disparities Advisory Group and Assistant Professor of Medicine at  The University of Chicago Medicine.

The report, The State of Cancer Care in America: 2014, cites a triple threat to that objective: the growing demand for services—by 2025, demand for cancer care is expected to jump by 42% as the population ages—and a looming workforce shortage of oncologists; changes in health-care delivery systems; and the economic pressures of maintaining small community oncology practices.

According to the report, by 2030, the number of new cancer cases in the United States will increase by 45%, from 1.6 million to 2.3 million per year—largely the result of an aging population—and cancer will overtake heart disease as the leading cause of death. Along with the additional increases in cancer incidence, there will also be a rapidly growing population of cancer survivors, from 13.7 million today to nearly 18 million by 2022, most of whom will need ongoing care to monitor for disease recurrence and the long-term effects of their initial treatment.

While the demand for cancer care will be on the rise over the coming decade, the supply of oncologists is projected to grow by only 28%, leaving a shortage of almost 1,500 oncologists, further straining the oncology health-care system. The anticipated retirement of many oncologists—currently, nearly one of every five cancer specialists is over the age of 64—as well as high levels of burnout, potentially leading to reduced clinical load or early retirement, are two factors contributing to the projected workforce shortage.

“On average, an oncologist sees about 300 new patients in a year, and if we increase the demand, the math suggests that almost half-a-million people will be facing some kind of challenge in accessing care,” Dr. Hudis said. Dr. Hudis is Chief of the Breast Cancer Medicine Service and Attending Physician at Memorial Sloan Kettering Cancer Center, and Professor of Medicine at Weill Cornell Medical College.

According to an ASCO analysis of the U.S. oncology workforce, oncologists are already in short supply in many rural areas. ASCO’s findings show that only 3% of oncologists practice in rural communities, where nearly one in five Americans lives. In addition, more than 70% of U.S. counties have no medical oncologist at all.

Further jeopardizing access to high-quality oncology care in rural regions and across America as well, is the reduction in the number of small and midsize community practices that find it necessary to shutter their doors, merge with larger practices or hospitals, or sell their businesses altogether because of loss of revenue from cutbacks in Medicare payments and other factors, such as the high cost of chemotherapy drugs.

Dr. Hendricks, a medical oncologist specializing in breast cancer, spoke at the ASCO press briefing about the difficulty she is having keeping her private practice open.

According to the report, to address the challenges facing the quality and delivery of cancer care and reduce the impact of the projected oncology workforce shortages, ASCO is calling on federal policymakers and other stakeholders in the oncology community to help create an environment where quality patient care can thrive. ASCO’s recommendations include:

The development and testing of new health-care delivery and payment models that preserve the viability of small community practices while encouraging high-quality care.

Ending persistent financial threats to community practices caused by sequester-related cuts to Medicare physician payments, and by the sustainable growth rate (SGR) formula, Medicare’s current reimbursement system that has become a source of tremendous instability within health care and a perennial threat to care for millions of seniors.

The embracement and support of physician-led quality initiatives, such as ASCO’s established Quality Oncology Practice Initiative (QOPI®) and the CancerLinQ™ rapid learning system currently under development.

ASCO is also recommending support of the SGR Repeal and Medicare Provider Payment Modernization Act of 2014 (S. 2000/H.R. 4015), which would eliminate the flawed SGR system, provide special support for practices in underserved areas, and support an array of innovative health-care payment, delivery, and quality initiatives, such as the ones included in The State of Cancer Care in America report.

“Congress right now has an unprecedented opportunity to address this challenge. The SGR Repeal and Medicare Provider Payment Modernization Act of 2014 is the vehicle to do this,” said Dr. Hudis. “We are specifically asking—urging—lawmakers to pass this legislation so that the cancer community can move beyond this repeated crisis mode that we’ve been in over and over again and instead focus on the pursuit of cancer care delivery innovation and scientific advance. This is the innovation that brings greatest value to our practices, our patients and their families, and the lifesaving treatments that everybody wants to see.”

According to Dr. Hudis, ASCO will release periodic reports on the progress being made in these areas.