Two studies of treatment of limited-stage NLPHL were recently published in the journal Blood. A retrospective analysis by Savage and colleagues1 indicated that ABVD or ABVD-like chemotherapy as part of primary treatment is associated with improved time to progression and progression-free survival compared with radiotherapy alone. A phase II trial reported by Eichenauer and colleagues2 in the German Hodgkin Study Group indicated that although first-line treatment with the anti-CD20 antibody rituximab (Rituxan) appears to be inferior to radiotherapy alone and combined-modality treatment, investigation of combination approaches including anti-CD20 antibody treatment in NLPHL is warranted.

Savage and colleagues analyzed outcomes in patients in the British Columbia Cancer Agency Lymphoid Cancer Database with limited-stage NLPHL (stage IA/IB or IIA, nonbulky disease < 10 cm) who were treated prior to 1993 with radiotherapy alone (RT era, n = 32) and another group treated after 1993, generally with two cycles of ABVD-like therapy followed by radiotherapy (ABVD era, n = 56).1  Of 56 ABVD era patients, 14 did not receive radiotherapy and 6 received only radiotherapy. Four ABVD era patients received MOPP (mechlorethamine, vincristine, procarbazine, prednisone) plus ABV. One RT era patient received MOPP. Most patients were male (75% in each group), most were aged 40 years or younger (62.5% of RT era patients and 61% of ABVD era patients), most had stage I disease (66% and 59%, respectively), and mass size was 5 cm or smaller (72% and 66%, respectively) in most patients with measurements. 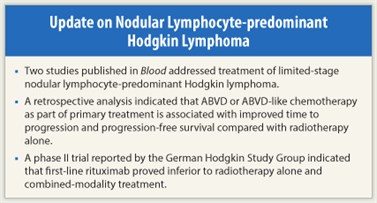 Patients treated in the ABVD era had markedly better long-term outcomes than those in the RT era, including a markedly reduced incidence of relapse and transformation to aggressive lymphoma. Median follow-up for living patients was 6.4 years (range, 1.2–40.5 years). For patients treated in the ABVD era, 10-year time to progression was increased from 76% to 98% (P = .0074), progression-free survival from 65% to 91% (P = .0024), and overall survival from 84% to 93% (P = .07) compared with those treated in the RT era. The only lymphoma relapse observed in ABVD era patients was in a patient who received RT alone. In contrast, with a median time to progression of 5.3 years, there were 12 relapses in RT era patients, including 5 cases of transformation to aggressive lymphoma.

An “as treated” analysis comparing outcomes in patients who received chemotherapy in either era as part of primary treatment (n = 51, median follow-up of living patients, 5.7 years) vs those receiving radiotherapy alone in either era (n = 35, median follow-up of living patients, 18.6 years) showed a significantly greater 10-year progression-free survival rate among patients receiving chemotherapy (100% vs 77.5%, P = .0029). No relapses occurred in the chemotherapy patients, compared with 10 among those receiving RT alone. Most relapses in the radiotherapy-alone patients occurred within 5 years of diagnosis.

In a single-arm phase II trial conducted by Eichenauer and colleagues,2 28 evaluable patients with newly diagnosed stage IA NLPHL received four weekly infusions of rituximab at 375 mg/m2. Patients had a median age of 40 years, 71% were male, and 72% had supradiaphragmatic disease. After diagnostic lymph node biopsy, 39% of patients were in complete remission and 61% had residual disease.

At a median follow-up of 43 months, the overall response rate was 100%, with complete remission in 86% and partial remission in 14%. Progression-free survival estimates at 12, 24, 36, and 48 months were 96%, 85%, 81%, and 77%, respectively. Relapse occurred in seven patients (25%), and two developed secondary solid tumors. All relapses occurred in patients with residual disease after diagnostic lymph node resection. No grade 3 or 4 adverse events were observed.

In a German Hodgkin Study Group retrospective analysis of 131 patients with early-stage disease receiving radiotherapy alone or combined-modality therapy, the freedom from treatment failure rate at 43 months was 95%.3 A single center analysis of 113 patients with stage I or II disease receiving radiotherapy alone showed a 5-year progression-free survival of 95% with a median follow-up of 136 months for living patients. However, secondary malignancy was the main cause of death in this group.4

The authors noted that “anti-CD20 antibodies have a favorable toxicity profile and may be offered to young patients who are at particular risk for long-term side effects, such as secondary malignancies. In addition, the combination of anti-CD20 antibodies and chemotherapy may also improve efficacy and decrease toxicity of NLPHL treatment in early unfavorable, advanced, or relapsed disease.”2 ■