Combined-modality therapy provides a bladder-sparing alternative to radical cystectomy with comparable outcomes in patients with muscle-invasive bladder cancer, according to a pooled analysis of six Radiation Therapy Oncology Group (RTOG) trials.1 The study included 468 patients and showed that clinical T stage and complete response are important predictors of long-term survival in patients with muscle-invasive bladder cancer who undergo combined-modality therapy.

“Combined-modality therapy can spare the bladder, but the optimal [chemoradiation] regimen for [this approach] remains to be defined. The small sample sizes of these [six] studies do not allow comparisons between these trials to determine optimal combined-modality therapy,” said Raymond H. Mak, MD, of the Harvard Radiation Oncology Program, Boston, at the 2012 Genitourinary Cancers Symposium. 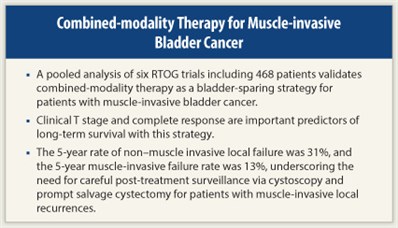 “This recurrence pattern underscores the need for careful post-treatment surveillance via cystoscopy [with prompt salvage cystectomy for invasive tumor recurrences] and further study for novel systemic therapies,” Dr. Mak told listeners. Patients with a complete response to combined-modality therapy had improved 5-year survival vs nonresponders: 79% vs 56%.

Multivariate analysis adjusted for age and histology found that higher clinical T stage (cT3/4 vs cT2) was associated with decreased overall and disease-specific survival. Elderly (age  ≥ 75) patients did not have significantly different disease-specific survival compared with younger (age 70-75 and age < 70) patients (64% vs 61% vs 67% at 10 years, respectively), Dr. Mak explained. Thus, the pooled data from these multi-institutional prospective trials indicate that bladder-preserving chemoradiation is a good treatment option for elderly patients, and satisfies an unmet need for treatment options in this group of patients, many of whom (30%-40% are not receiving curative treatment).2 ■

According to Seth P. Lerner, MD, Professor in the Scott Department of Urology at Baylor College of Medicine, Houston, and Co-chair of the session at the Genitourinary Cancers Symposium where the study by Mak and colleagues was presented, the data clearly demonstrate proof of principle that the...