The ASCO Post’s Integrative Oncology series is intended to facilitate the availability of evidence-based information on integrative and complementary therapies sometimes used by patients with cancer. In this installment, Gary Deng, MD, PhD, and Jyothirmai Gubili, MS, explore the use of the maitake mushroom (prized for its culinary value) and its extracts by patients with cancer as well as its potentially immunomodulating effects. 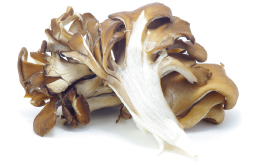 An edible mushroom prevalent in northeastern Japan and China, maitake is an important component of Asian cuisine. Known to grow over a hundred pounds, it is commonly referred to as the “King of the Mushrooms.”

Maitake is valued for promoting health and has been used in traditional medicine for centuries. Its extracts are marketed as dietary supplements, in the form of liquid extracts, tablets, and capsules, to enhance immune function and to treat AIDS and cancer.

The discovery, in the 1980s, that maitake contains more bioactive polysaccharides than other medicinal mushrooms led to increased research efforts. The polysaccharides include alpha and beta glucans, with the D- and further purified MD- fractions exhibiting strong immunomodulating and antitumor effects. Limited clinical data suggest that maitake has immunomodulatory effects and may enhance the effectiveness of chemotherapy.

In an exploratory study9 involving 36 patients with advanced cancer (liver, breast, and lung) who discontinued chemotherapy, cancer regression or improvement in symptoms were observed in 23 participants after taking oral tablets containing MD-fraction and whole maitake powder. However, the authors did not report the dosage or duration of the treatment.

The study also presented case series in which maitake combined with chemotherapy potentiated immune function, compared with chemotherapy alone. The daily dosage ranged between 100 mg and 150 mg MD-fraction plus 4 g to 6 g of whole maitake powder, over variable duration.

Physicians should know that maitake mushrooms can have dual effects on the immune system: stimulation and suppression. They also should be aware that the clinical evidence of its anticancer effects is limited, along with its potential for interactions with warfarin and hypoglycemic medications.

In a dose-escalation trial of 34 postmenopausal patients with breast cancer,10 an oral maitake extract (0.1, 0.5, 1.5, 3, or 5 mg/kg taken twice daily for 3 weeks) was reported to be safe and conferred both immunostimulatory and suppressant effects. A statistically significant association was observed between the dose and immune response (P < .0005), with the strongest effects seen at 3 mg/kg twice daily. The clinical relevance of such effects has yet to be determined.

Asymptomatic eosinophilia was reported in patients with MDS after consumption of maitake.11

Warfarin: Concomitant use of warfarin may elevate the international normalized ratio.20

Hypoglycemic medications: Maitake may have synergistic effects with hypoglycemic agents.21

Maitake is a popular, edible mushroom that is prized for its culinary value. Limited clinical studies using maitake extracts show that it can modulate the immune system. However, the clinical meaningfulness of these effects has yet to be determined. Before embarking on the use of maitake extract, patients should consult their physicians to discuss dosage and any potential interactions, especially if they are on hypoglycemic medicines or anticoagulants. ■