I Was Not Prepared for the Emotional Toll of Cancer 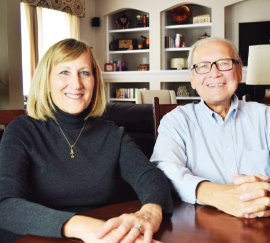 In 1996, an excruciating sore throat sent me first to my primary care physician and then to an ear, nose, and throat specialist, after a suspicious mass was found on the right side of my throat. A biopsy determined that the tumor was squamous cell neck cancer, and additional tests of my neck, respiratory tract, and digestive track showed that the cancer had already spread to the lymph nodes on both sides of my neck. I had stage IV cancer.

I was just 47 years old. I had a wife and 2 young children who depended on me, and I was willing to do whatever it took to survive. I sought out the care of a well-known surgical oncologist near my home, and he recommended a bilateral radical neck dissection, followed by radiation therapy and chemotherapy. He explained the potential long-term side effects of the surgery, including stiffness and swelling in my neck, shoulder weakness, and changes in my speech and ability to swallow. Although the thought of having any of these side effects was terrifying, dying was even scarier, and I agreed to go ahead with the recommended treatment plan.

Fortunately, once my oncologist saw the tumor during the surgery, he decided it could be successfully treated with aggressive radiotherapy and chemotherapy, and left the tumor alone, sparing me the possibility of long-lasting disfigurement, pain, and problems eating and communicating. He removed one lymph node, and I prepared for the next steps in my treatment, hoping they would be enough to give me back the life I had had before cancer.

Overcoming the Effects of Cancer

Although I was relieved to learn I had avoided the need for a neck dissection and its attendant effects, I was soon plagued with other severe physical side effects from 40 rounds of radiotherapy and 2 rounds of chemotherapy, which drastically altered my quality of life. The radiation therapy to my neck burned my throat. I was unable to eat solid food for months after completing therapy, and I had to receive daily nutrition through an intravenous drip at the hospital. The treatment left me so exhausted, I could barely muster the energy necessary to work and would come home each night and collapse.

Gradually, I began to improve and get my physical strength back. With the cancer in remission, I now turned my focus on restoring stability in my family life. I pushed aside any emotional consequences I was feeling about my diagnosis and kept moving forward. And right at that moment, crisis struck again.

Spending My Way Out of Cancer

In 1998, my wife, Cyndy, was diagnosed with uterine leiomyosarcoma; she died the following year. Even before her death, I had started spending down our savings, convinced that lavish vacations in Europe and other high-priced indulgences—including a custom-made Porsche—would distract us from the possibility of my death. I also wanted to leave my family with happy memories of our last days together.

When I look over my life since my cancer diagnosis, I regret that I wasn’t better prepared to emotionally cope with the disease and that I nearly put my family into financial ruin.
— Dale Maloney

With the death of my wife, I ramped up the spending, getting deeper and deeper into financial debt, never considering that I might actually live a long life and would be putting my children (then aged 15 and 12) and myself into potentially irreversible financial jeopardy. I eventually realized how distorted that thinking was, and although it has taken me years, I have finally become financially solvent again.

The lesson has been incredibly valuable for me. As a result, I’ve begun coaching other cancer survivors on the importance of conserving money and maintaining a viable financial plan, even in the face of life-threatening illnesses.

Getting My Life Back

A few years after my wife’s death, I was fortunate to meet and marry another wonderful woman, Lynn, and we now have a blended family of five children and seven grandchildren. Although the long-term effects of my radiation therapy still haunt me—I continue to have swallowing difficulty, which I’m able to keep under control with physical therapy, and a minor stroke I had in 2015 has also been linked to my cancer treatment—I’ve remained relatively healthy since my diagnosis 23 years ago. Most important, I’ve remained cancer-free.

When I look over my life since my cancer diagnosis, I regret that I wasn’t better prepared to emotionally cope with the disease and that I nearly put my family into financial ruin. Now, I realize that while I can’t control all of life’s events, I can control how I react to them, and I’m ready for the next challenge, whatever that may be. ■