Carson Leslie was a kind, popular, lively teen who loved sports and spending time with his family and friends. He was a devoted student at The Covenant School of Dallas, where he was quarterback on the school’s football team, and he was an active member of Grace Bible Church. He shared a special bond with his older brother Craig, and the two were inseparable. He was “an indomitable spirit, [even] as a little boy,” and “the kid everyone wanted to spend the night with on Fridays,” reminisced his mother, Annette Leslie.

When Carson was 14, he experienced symptoms that initially perplexed his physicians, but ultimately led to a diagnosis of medulloblastoma. He underwent grueling treatments for 3 years until he and his family were told there was nothing further that could be done. He died at the age of 17 in early 2010.

Throughout his years of treatment, Carson kept a journal. These writings eventually became a book, Carry Me, which was published 6 days before his death. The book provides a glimpse of what it is like to fight a life-threatening disease as a teen. Carson wrote, “I have written a book to give a voice to the teenagers and children who have cancer but are unable to express how such an illness affects their personal, social, physical, and emotional life…. I wish to make a difference, and I know others my age want to do the same.”

“Carson was a giver at heart,” reflected Ms. Leslie. When it became clear that he would not survive his disease, he told his parents, “…Make sure they study those tumors in my brain, because if those tumors can help some kid someday not die from cancer like I am, I’d like that; it’s hard to have cancer.” His family honored his request, donating tumor samples that were used for mouse models. This was only the beginning of the contributions from Carson and his family.

Through a collaboration with the Cancer Prevention and Research Institute of Texas, the Foundation supported the Carson Leslie Awards for Pediatric Brain Cancers, which translated to a total of $3.2 million for research programs at the University of Texas Southwestern Medical Center, Baylor College of Medicine, and Texas Tech University Health Sciences Center. The foundation has also established a #cureMEdullo initiative to further propel its research support. One of the first efforts as part of this initiative is supporting a Conquer Cancer Foundation of ASCO/#cureMEdullo powered by the Carson Leslie Foundation Young Investigator Award in Medulloblastoma Research. 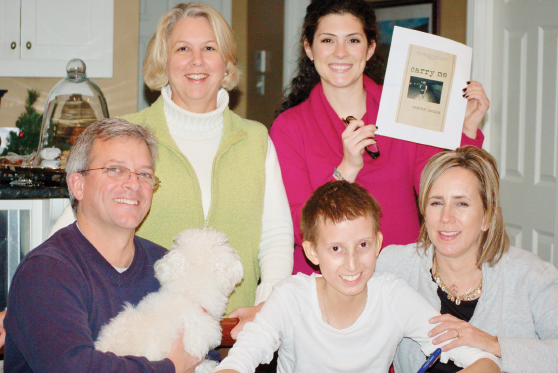 The Carson Leslie Foundation’s work is not limited to research. Since Carson had cancer for most of his teenage years, his family saw a need to fill a void in services and activities geared to patients with cancer in this age group. “When Carson was in [inpatient care], he never left his room,” explained Ms. Leslie. “The playroom was full of ‘loud little kids’ and those were very lonely days for him. So, we built the teen room—affectionately named Carson’s Corner—on the oncology floor at Children’s Health, Dallas, where he was treated.”

Ms. Leslie added, “When Carson was diagnosed, we arrived at the emergency room with nothing, so we now provide Under Armour backpacks for newly diagnosed or relapsed teens full of items that might come in handy during long hospital stays. We are thrilled to have a partnership with the Jordan Spieth Family Foundation to expand our backpack project to additional hospitals.”

“The joining of forces between our organizations represents our synergistic commitment to advancing research in medulloblastoma and ensuring a cadre of investigators focused on this important area,” said Gerald McDougall, a Conquer Cancer Board member and Chairman of the Carson Leslie Foundation. “Based on my decades of working with leading cancer organizations, leveraging the ASCO infrastructure by supporting the Conquer Cancer Young Investigator Award program makes sense for [both] these organizations.”

“Since inception, #cureMEdullo/the Carson Leslie Foundation’s singular focus has been to accelerate the most promising science and therapeutic advances in our pursuit of cures for children fighting medulloblastoma,” said Walter Capone, a Carson Leslie Foundation Board member and Director of its #cureMEdullo initiative. “Conquer Cancer’s mission is exquisitely aligned with Carson Leslie’s, and we are deeply gratified to partner with such a powerful organization on this ambitious journey.”

“We are honored to work with the Carson Leslie Foundation to make progress against medulloblastoma,” said Nancy R. Daly, MS, MPH, Chief Philanthropic Officer for Conquer Cancer. “The Leslie family’s commitment will make a tremendous impact and bring hope to other children and families suffering from this disease.”

“It is an honor to partner with ASCO and Conquer Cancer by investing in a Young Investigator Award,” concluded Ms. Leslie. “We have great hope a young, eager open mind will unlock secrets hidden in the complexity of medulloblastoma and bring less toxic treatment[s] to this awful disease with an ultimate goal—a cure.” ■