Advanced HER2-Positive Breast Cancer: All Eyes on These Novel Agents

NEW AGENTS for the treatment of advanced HER2-positive breast cancer should be coming soon to your clinic, according to Sara A. Hurvitz, MD, Director of the Breast Cancer Clinical Research Program and Associate Professor of Medicine at the David Geffen School of Medicine at the University of California, Los Angeles. Although there are many controversies in breast cancer treatment, virtually none are over the first- and second-line treatments of advanced HER2-positive breast cancer. “However, in third line and beyond, where there are many different treatment options, is—to quote Dr. William Gradishar—the ‘wild, wild West,’” she said. “Right now, the main paradigm is to continue HER2-targeted therapy, but you can swap out the agent and can swap out its partner.”

Clinicians can expect new agents soon. “The landscape may change in a year or 2,” Dr. Hurvitz predicted at the 2019 Miami Breast Cancer Conference.1 “There are some very promising agents that may become available for later lines and may actually  challenge the treatment paradigm we currently follow.” That paradigm is currently standard trastuzumab, pertuzumab, and docetaxel (THP) in the first-line setting, and trastuzumab emtansine (T-DM1) in the second line. Trials are being designed to compare new agents head-to-head against T-DM1, she said.

MARGETUXIMAB IS an Fc-optimized chimeric monoclonal antibody designed to increase HER2 immune targeting. Tighter binding to the immune effector cells enhances the immune response. The drug was granted Fast Track designation in January 2018.

In the phase III SOPHIA trial of heavily pretreated patients, single-agent margetuximab given after chemotherapy yielded a 24% risk reduction in disease progression vs standard trastuzumab (P = .033), according to a company press release.2 In carriers of the CD16A (FcγRIIIa) 158F allele (which is associated with diminished clinical response to trastuzumab), margetuximab led to a 32% risk reduction (P = .005). The study reportedly met its primary endpoint.

“There are some very promising agents that may become available for later lines and may actually challenge the treatment paradigm we currently follow [in HER2-positive breast cancer].”
— Sara A. Hurvitz, MD

“Based on these two studies, NALA and SOPHIA, I think it’s safe to say that we may have two drug approvals before Miami Breast next year,” Dr. Hurvitz predicted.

Trastuzumab deruxtecan, which has been granted Breakthrough Therapy designation, is a HER2-targeting antibody-drug conjugate with a novel linker linked to a novel payload (a derivative of irinotecan). A unique feature of this molecule is the high drug-to-antibody ratio (7.8), which is double that of T-DM1 (3.5), meaning “you’re getting a lot of the chemotherapy,” she explained. Trastuzumab deruxtecan can permeate outside of the breast cancer cell, after internalization, creating a potent bystander effect.

In a phase I study of 111 patients, the objective response rate with trastuzumab deruxtecan was 54.5%, the disease control rate was 93.9%, and the median progression-free survival was not reached.3

Pneumonitis, however, could be a problem with this agent, thus future clinical trials will use a lower dose of 5.4 mg/kg every 3 weeks and will exclude patients with existing lung disease or other risk factors.

Significant activity has been observed in persons with HER2-positive advanced breast cancer who have received T-DM1 as well as standard trastuzumab with or without pertuzumab as well as in heavily pretreated persons with low expression of HER2 (HER2-low), with durable responses seen regardless of hormone receptor status. Among numerous ongoing or recently completed clinical trials of trastuzumab deruxtecan are a phase I study combining the drug with immunotherapy and several phase III trials in HER2-low disease as well as HER2-positive disease.

PYROTINIB IS a pan-HER receptor tyrosine kinase inhibitor similar to neratinib. It was evaluated in combination with capecitabine (vs lapatinib/capecitabine) in a phase II randomized trial, with objective response as the primary endpoint.4 The study met its primary endpoint, with an overall response rate of 78.5% in the pyrotinib arm and 57.1% in the lapatinib arm (P = .01). The median progression-free survival was also significantly longer with pyrotinib, 18.0 months vs 7.0 (hazard ratio [HR] = 0.36; P < .001), irrespective of prior use of trastuzumab. A phase III trial is ongoing. 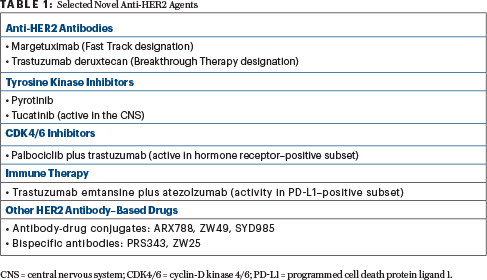 Tucatinib is a HER2-selective tyrosine kinase inhibitor. As an oral agent, tucatinib may be associated with fewer side effects than other such inhibitors. In a small phase I study, the triplet of tucatinib, capecitabine, and standard trastuzumab led to a 61% response rate and a median progression-free survival of 7.8 months.5 This encouraging activity was seen in a heavily pretreated population, which included patients with brain metastases, she said.

Because of activity in the central nervous system (CNS; response in 5 of 12 patients with CNS disease progression in the study), tucatinib has received Orphan Drug status for HER2-positive brain metastases. This triplet is currently being evaluated in a randomized phase II registration trial (HER2CLIMB), which allows patients with progressive CNS disease to enroll.

INHIBITORS OF cyclin-D kinase 4/6 (CDK4/6) are also being studied in HER2-positive disease. “There are ample preclinical data that HER2-positive disease should respond to CDK4/6 inhibitors, but this is a crowded space, and many companies have not been interested in looking at their drugs in the HER2 realm,” she commented.

“There are ample preclinical data that HER2-positive disease should respond to CDK4/6 inhibitors, but this is a crowded space.”
— Sara A. Hurvitz, MD

One study, however, is the phase I PATRICIA trial of palbociclib plus standard trastuzumab.6 It included patients with hormone receptor–negative disease, who received palbociclib plus standard trastuzumab (one cohort), and those with hormone receptor–positive disease, who received the same regimen with and without letrozole (two cohorts). PAM50 (prediction analysis microarray 50) was also analyzed. Both hormone receptor–positive cohorts met the 6-month progression-free survival endpoint (≥ 40%) and have advanced to the next stage of the trial. However, 33% of the hormone receptor–negative cohort were progression-free at 6 months, so that cohort was discontinued.

By the PAM50 analysis, patients with the luminal subtype had the best progression-free survival with the combination, with 73% of this group being progression-free at 6 months and achieving a median progression-free survival of 12.4 months, vs 4.1 months for nonluminal subtypes (HR = 0.37; P = .052). This suggests that PAM50 analysis may be a means of defining the best candidates for this treatment. The ongoing PATRICIA 2 study follows an adaptive design, evaluating palbociclib, standard trastuzumab, and endocrine therapy vs physician’s treatment of choice in pretreated, luminal, or estrogen receptor–positive, HER2-positive metastatic breast cancer.

In comparison, in the PD-L1–negative group, atezolizumab added no benefit, nor did it add benefit for patients with higher HER2 expression (immunohistochemistry [IHC] 3+ vs 1+ or 2+). “This was not a multivariable analysis, but these biomarkers are interesting,” Dr. Hurvitz commented.

“A theme we’ve seen with almost all T-DM1 studies that have looked at HER2 expression [is that] T-DM1 activity requires HER2 expression to be high.”
— Sara A. Hurvitz, MD

She also pointed out that T-DM1 alone in patients with low IHC yielded a median progression-free survival of just 4.0 months, “showing these patients do not do well at all with T-DM1, which is a theme we’ve seen with almost all T-DM1 studies that have looked at HER2 expression. T-DM1 activity requires HER2 expression to be high.”

Other HER2 Antibody–Based Drugs in Phase I Trials