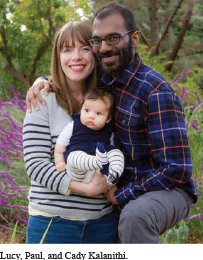 What initially drew me to read the eloquent essay by Paul Kalanithi, MD, in The New York Times—“How Long Have I Got Left?”—was its provocative title.1 What kept me there was the moving description of his quick transition from healthy physician with a brilliant career in neurosurgery to terminally ill cancer patient. A lifelong nonsmoker, Dr. Kalanithi was diagnosed with stage IV non–small cell EGFR-positive lung cancer in spring 2013 at age 35. He died from the disease on March 9, 2015.

In his essay, Dr. Kalanithi said that even more difficult than facing the certainty of death was facing an uncertain life. “The path forward would seem obvious, if only I knew how many months or years I had left,” he wrote. “Tell me 3 months, I’d just spend time with my family. Tell me 1 year, I’d have a plan…. Give me 10 years, I’d get back to treating diseases. The pedestrian truth that you live one day at a time didn’t help: What was I supposed to do with that day? My oncologist would only say, ‘I can’t tell you a time. You’ve got to find what matters to you most.’”

Living With an Uncertain Future

When Dr. Kalanithi wrote that essay, he was 8 months from his diagnosis and was having a positive response to erlotinib. The majority of the malignant spots on his lungs had disappeared, and the primary lung nodule had shrunk. In fact, his strength had recovered so substantially, he had returned to work as Chief Resident in Neurological Surgery at Stanford University School of Medicine in California.

Just 2 months later, when I interviewed Dr. Kalanithi for his Patient’s Corner column, “I Refuse to Capitulate to Cancer” (reprinted April 10, 2015), he was feeling so much stronger, he said he was beginning to overcome the immediate challenge of having advanced lung cancer and wondering how much time he had left. He was also excited about starting a family with his wife, Lucy Goddard Kalanithi, MD, FACP, a Clinical Instructor in Medicine at the Stanford School of Medicine.

“At the moment, my life is at the maximum point of uncertainty,” said Dr. Kalanithi. “I need to get my career trajectory fully back on course, and my wife is pregnant with our first child. So life is really exciting—and stressful. But these are the stresses of the living, not of dying. The fact that I get to deal with all of the worries of having a highly demanding career and a new family is a blessing.”

Unfortunately, soon after our interview, Dr. Kalanithi relapsed and underwent 3 months of chemotherapy and endured a prolonged hospitalization. On July 4, 2014, just days after Dr. Kalanithi was released from the hospital, Lucy Kalanithi gave birth to their daughter, Elizabeth Acadia.

Nicknamed “Cady,” Dr. Kalanithi wrote about the joy his infant daughter brought to his life in an essay penned in Stanford Medicine,2 which he ended with this message to her: “When you come to one of the many moments in life when you must give an account of yourself, provide a ledger of what you have been, and done, and meant to the world, do not, I pray, discount that you filled a dying man’s days with a sated joy, a joy unknown to me in all my prior years, a joy that does not hunger for more and more, but rests, satisfied. In this time, right now, that is an enormous thing.”

Dr. Kalanithi was born in New York in April 1977, and moved with his family to Kingman, Arizona, when he was 10. He graduated from Stanford University in 2000 with bachelor’s and master’s degrees in English literature and a bachelor’s degree in human biology. He earned a master’s degree in the history and philosophy of science and medicine at the University of Cambridge and then attended Yale School of Medicine, graduating cum laude in 2007. While at Yale, Dr. Kalanithi was awarded the Lewis H. Nahum Prize for his research on Tourette’s syndrome and became a member of the Alpha Omega Alpha Honor Medical Society.

In 2007, Dr. Kalanithi returned to Stanford for a residency in neurological surgery and a postdoctoral fellowship in neuroscience, developing optogenetic techniques. It was during his sixth year of residency that Dr. Kalanithi began experiencing a constellation of troubling symptoms, including weight loss, fevers, night sweats, severe chest and back pain, and a cough. When he reviewed the images from his CT scans and saw masses of lesions spreading across his lungs and deforming his spine, he knew immediately that what he was seeing was metastatic cancer.

The experience of being a patient, said Dr. Kalanithi, gave him a much deeper appreciation of how difficult it is for patients to navigate their way through a serious illness. “[That experience] is something I will never forget, and I wish in some ways that every doctor can experience a really hard diagnosis and the impact it has [on patients],” said Dr. Kalanithi.

Aware of the precariousness of his illness, Dr. Kalanithi was determined to proceed with his life, knowing that at any moment his cancer could become uncontrollable. Until that happens, he said, “I’m pursuing the things that drive me. The fact of death is unsettling. Yet there is no other way to live.”

Dr. Kalanithi is survived by his wife, Lucy; his daughter, Cady; his parents, Sujatha and A. Paul Kalanithi, MD; his brothers, Suman Kalanithi, MD, and Jeevan Kalanithi; his sister-in-law, Emily Kalanithi, JD; and his niece and nephew, Eve and James Kalanithi. ■