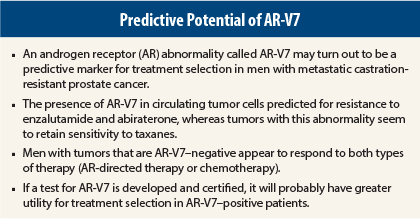 AR-V7 testing may be extremely valuable in guiding treatment decisions for men with hormone-resistant disease in the near future.

The search is on in prostate cancer to identify predictive and prognostic biologic and genomic markers that go beyond traditional ones. Several groups are working in this area. One marker that has received much attention is a splice abnormality in the androgen receptor (AR) called AR-V7.

A preliminary study presented at the 2015 Genitourinary Cancers Symposium showed that the presence of AR-V7 in circulating tumor cells was compatible with sensitivity to taxanes in men with metastatic castration-resistant prostate cancer about to initiate therapy with docetaxel or cabazitaxel (Jevtana).1

The same group of investigators presented a previous study at the 2014 ASCO Annual Meeting2 and subsequently published in The New England Journal of Medicine,3 showing that the presence of AR-V7 was predictive of primary resistance to AR-directed therapy with enzalutamide (Xtandi) and abiraterone (Zytiga).

Taken together, these results suggest that AR-V7 may be helpful in selecting therapy for men with metastatic castration-resistant prostate cancer. Men whose tumors are positive for AR-V7 should probably be offered a taxane and not be treated with abiraterone or enzalutamide, whereas men who are AR-V7–negative can be safely treated with either option.

“We urgently need markers that predict which therapies are going to be effective and which will not … in individual patients with prostate cancer. AR-V7 testing may be extremely valuable in guiding treatment decisions for men with hormone-resistant disease in the near future,” said lead author Emmanuel Antonarakis, MD, of Sidney Kimmel Comprehensive Cancer Center at Johns Hopkins in Baltimore.

“These data need to be validated prospectively in a larger study,” he noted.

The present study enrolled 37 men with metastatic castration-resistant prostate cancer slated for chemotherapy with a taxane; 17 of the 37 were positive for AR-V7. All patients responded to therapy equally, regardless of their AR-V7 status. Prostate-specific antigen (PSA) responses (ie, > 50% decline from baseline in PSA value) were achieved in 41% of the AR-V7–positive group and 65% of the AR-V7–negative group.

For example, in the pooled data, in AR-V7–positive men, PSA response was observed in 41% of the taxane-treated group and 0% of the abiraterone/enzalutamide group. In addition, median PSA–progression-free survival and median progression-free survival were significantly longer in taxane-treated men compared with those receiving abiraterone/enzalutamide (P = .001 and P = .003, respectively).

Dr. Antonarakis said that typically, about 30% of men with castration-resistant prostate cancer have the AR-V7 abnormality detected in circulating tumor cells. It is thought to occur more frequently in patients who have been heavily pretreated with hormonal therapies.

Dr. Antonarakis utilized a quantitative reverse transcription–polymerase chain reaction assay to identify AR-V7 mRNA in circulating tumor cells. At present, there is no commercially available or standardized test for identifying AR-V7. Several groups of investigators and industry partners are working on developing such a test.

For AR-V7 to find use in the clinical setting, larger prospective trials will have to be conducted to validate this predictive biomarker. In addition, a test approved by Clinical Laboratory Improvement Amendments will need to be available. ■

Disclosure: Dr. Antonarakis has received honoraria and travel expenses from as well as served as a consultant or advisor to Dendreon, Medivation, and Sanofi. His institution has also received research funding from Aragon Pharmaceuticals, Dendreon, Exelixis, Genentech, Janssen Biotech, Inc, Johnson & Johnson, Millennium, Novartis, and Sanofi.

AR-V7 is only one of the many prostate cancer predictive biomarker candidates currently under investigation,” said Howard Scher, MD, Chief of the Genitourinary Service at Memorial Sloan Kettering Cancer Center in New York. While preliminary data are promising, further development of AR-V7 will...