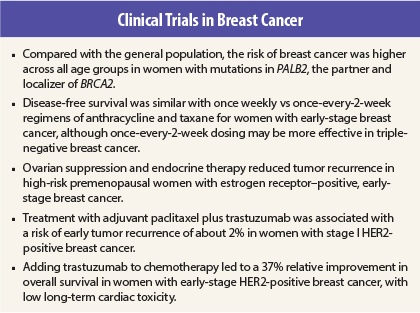 Based on the SOFT and TEXT trial results, it is important to discuss ovarian suppression in addition to endocrine therapy with estrogen receptor–positive, high-risk premenopausal patients.

Anyone who has attended the major oncology meetings knows that research from clinical trials in breast cancer often dominates the stage, with countless abstracts featuring new and updated results. To help the readers of The ASCO Post stay up to date with the latest discoveries and findings impacting the treatment of women with breast cancer, I have assembled highlights from a collection of newsworthy studies featured over the past year and into early 2015.

Presented here is Part 1 of this review, which centers on genetics and adjuvant therapy for several different receptor types of breast cancer. Part 2, which will appear in an upcoming issue of The ASCO Post, will focus on new therapeutic options for metastatic disease (such as palbociclib [Ibrance] and pictilisib) as well as several survivorship issues (such as fertility preservation, diet, and exercise).

In a study by Antoniou and colleagues,1 362 members of 154 families who had deleterious truncating, splice, or deletion mutations in PALB2—the “partner and localizer of BRCA2,” whose protein product works with and stabilizes the BRCA2 protein—were assessed to determine the cumulative risk of breast cancer. Germline loss-of-function mutations in this gene are known to confer a predisposition to breast cancer. The investigators used a modified segregation-analysis approach to estimate the age-specific breast cancer risk for carriers of PALB2 mutations.

The investigators think their data suggest that the breast cancer risk for PALB2 mutation carriers may overlap with that for BRCA2 mutation carriers. In addition, PALB2 is identified as the second most important susceptibility gene for familial pancreatic cancer, right after BRCA2.

Clinical Perspective: BRCA1 and BRCA2 are well studied, and the related risk of breast and ovarian cancers is well established. In the clinic, however, we see many patients who have a strong family history of early breast and ovarian cancers but are negative for the BRCA mutation. Identification of more genes such as PALB2 will help us to treat these patients better and craft risk-reduction strategies. Genetic evaluation, counseling, testing, and preventive approaches will continue to evolve as data accumulate on these mutations.

In the phase III SWOG S0221 study, Budd and colleagues attempted to determine the optimal dose and schedule combining anthracycline and taxane administration in the adjuvant treatment of 3,250 women with early-stage node-positive or high-risk node-negative breast cancer.2 The four comparison regimens included a continuous schedule of doxorubicin-cyclophosphamide, six cycles of doxorubicin-cyclophosphamide once every 2 weeks, paclitaxel once a week, and six cycles of paclitaxel once every 2 weeks.

Key Findings: Patients achieved a similar disease-free survival on any of the regimens studied, with interim analyses crossing the futility boundaries for demonstrating superiority of both once-per-week regimens and once-every-2-week regimens. However, according to a subset analysis, once-every-2-week dosing may be best for women with triple-negative breast tumors (estrogen receptor–negative, hormone receptor–negative, and HER2-negative).

Clinical Perspective: The updated results of ECOG 1199 confirmed that weekly paclitaxel is superior to every-3-week paclitaxel.3 In that particular study, a dose-dense regimen was not tested. SWOG S0221 is the only study to compare weekly paclitaxel with every-2-week treatment and suggests that either regimen is acceptable for estrogen receptor–positive patients but that every-2-week treatment may be better for triple-negative disease.

The TEXT and SOFT trials focused on the use of adjuvant ovarian suppression in combination with an aromatase inhibitor4 or tamoxifen5 in the treatment of premenopausal women with hormone receptor–positive breast cancer. In the two phase III studies, the investigators compared the use of the aromatase inhibitor exemestane plus ovarian suppression with tamoxifen plus ovarian suppression for 5 years. The gonadotropin-releasing hormone agonist triptorelin (Trelstar), oophorectomy, or ovarian irradiation was used to achieve suppression of ovarian estrogen production. Combined data from 4,690 patients in the two trials were included in the primary analysis.

Key Findings: Adjuvant treatment with exemestane plus ovarian suppression significantly reduced tumor recurrence over tamoxifen plus ovarian suppression. The disease-free survival at 5 years was 91% in the group that received the aromatase inhibitor and 87% in the group that received tamoxifen (hazard ratio [HR] for disease recurrence, second invasive cancer, or death was 0.72, 95% CI = 0.60–0.85, P < .001).

Clinical Perspective: From the Oxford overview analysis and other studies, it is well known that ovarian suppression will potentially benefit patients with early-stage breast cancer. However, we lacked direct evidence in the form of a prospective, randomized trial. Now, with the SOFT and TEXT trial results showing a clear benefit, it is important to consider ovarian suppression in addition to endocrine therapy for estrogen receptor–positive, high-risk premenopausal patients.

In a phase II study of more than 400 patients with node-negative, small HER2-positive breast tumors (measuring up to 3 cm in greatest dimension),6 Tolaney and colleagues assessed the weekly treatment of paclitaxel and trastuzumab (Herceptin) for 12 weeks, followed by 9 months of trastuzumab monotherapy. Most of these women were ineligible for the pivotal trials of adjuvant trastuzumab.

Key Findings: The 3-year invasive disease-free survival rate was 98.7% (95% CI = 97.6–99.8), which the investigators considered to be “better than expected” based on the historic data. Of the 12 relapses reported, 2 were the result of distant metastatic breast cancer. The investigators concluded that treatment with adjuvant paclitaxel plus trastuzumab was associated with a risk of early tumor recurrence of about 2% in women with predominantly stage I HER2-positive breast cancer. However, they noted that 6% of patients withdrew from the study because of protocol-specific adverse events.

Clinical Perspective: For women with small HER2-positive, estrogen receptor–positive tumors, the role or benefit of chemotherapy in addition to HER2 blockade and endocrine therapy has not been clear. This study and regimen clearly offer a less-toxic regimen with trastuzumab, which should change our practice in these low-risk patients.

The joint analysis from NSABP B-31 and NCCTG N9831 focused on the use of trastuzumab along with adjuvant chemotherapy for more than 4,000 women with HER2-positive breast cancer.7 In both trials, women with operable breast tumors received doxorubicin and cyclophosphamide followed by paclitaxel with or without trastuzumab.

Clinical Perspective: Two key findings from this long-term follow-up analysis are the continued benefit of trastuzumab beyond 5 years and up to 10 years as well as the very low rate of long-term cardiac toxicity in the patients who were treated with trastuzumab. ■